As 2019 draws to a close, the wrestling landscape has seen some subtle and dramatic changes this past year. AEW has become a living, breathing promotion that continues to grow, NXT continues to excel and produce a conveyor belt of top talent and WWE has reverted back to splitting their roster as well as introducing some fresh faces among their ranks. I make no apologies for my writings about mainly WWE programming – because I literally don’t have time to watch anything else, so that’s why I don’t comment or critique anything AEW, NJPW or anything else – but one group I really enjoy following, watching and writing about are the women in WWE, and not just ‘The Man’ Becky Lynch.

This year has been a mixed bag for the women if we’re being fair. True, there have been steps forward, but I can’t say that everything has been wonderful and the future looks bright for all the female talent in WWE. There will always be detractors for anything seen as generally positive, no matter the discussion and likewise there will always be some who see positivity, no matter how bleak the picture. For this, I wanted to dissect a few notable moments for the Women’s Division in WWE in recent weeks and try to give a balanced overview on what has happened and my opinion of it.

Two WWE women having a match in the Middle East is not new, as Sasha Banks and Alexa Bliss had the first women’s WWE match there in Abu Dhabi, United Arab Emirates back in December 2017. This past week we saw Natalya vs Lacey Evans in the first women’s match in Saudi Arabia at Crown Jewel. The match itself was ok, and the crowd did sound somewhat invested, but it wasn’t a roof-raiser and based on the political and cultural differences between Saudi and the United States, it was to be expected. I agree that boundaries need to be pushed to progress change, and I imagine it would have made an impact for young girls and women watching in the live audience. 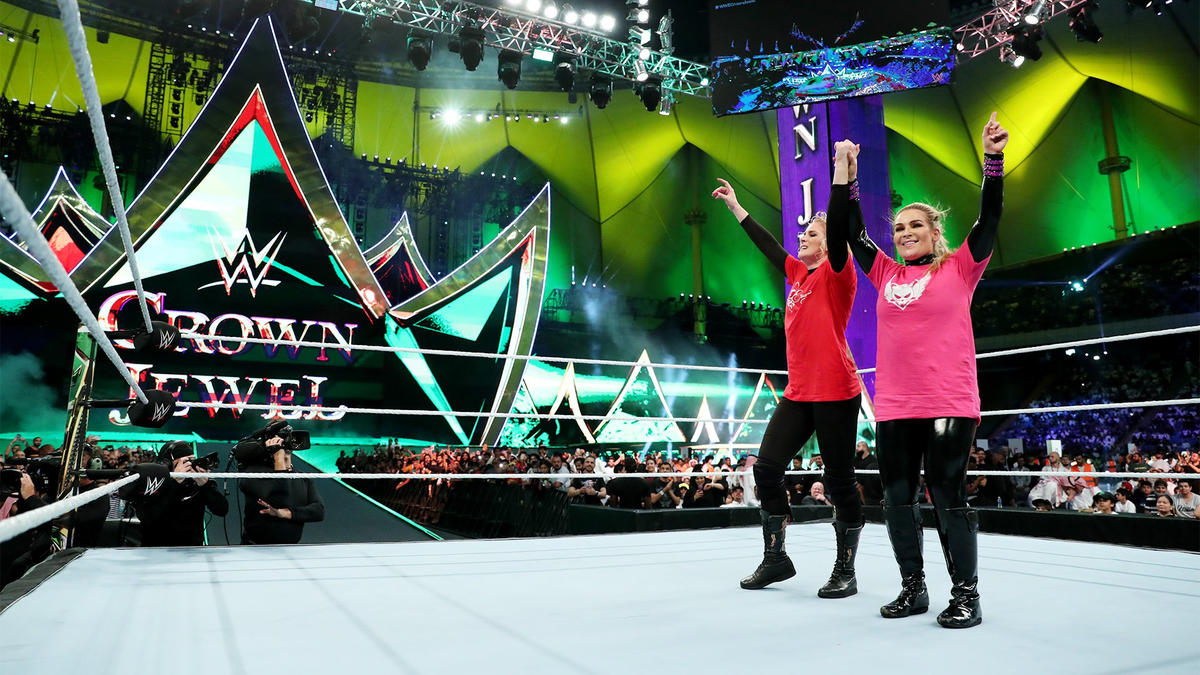 For all the hype and ‘ground-breaking’ press the match received, as a fan watching at home, I must admit that I did worry for Natalya and Evans. This was a difficult proposition for them. I have no idea how WWE arranged this match – was it suggested by them or from the Saudi’s who ‘invited’ WWE over there? – but it must have been challenging nonetheless. One question I’d like to ask is; was it fair of WWE to put these two in a match in a place renowned for historically oppressive attitudes towards women? That’s not a generalization of the people, but a fact of the laws of the land – granted there has been recent progress on these issues, but the point remains. Could WWE really make a difference by showcasing women in a match? Or is this a case of pandering to the almighty dollar and putting on a novelty act for the appeasement of some, whilst ignoring the wider issues of the host nation? WWE does a lot of work supporting gay rights and freedom of expression, yet I fear that is a line they would never cross for one of their shows, and that’s a shame. Could it be classed as an honor for Natalya and Lacey Evans? Of course, but will it be groundbreaking enough to instill change in a foreign land? Perhaps not.

If the booking of titles was given the name of a WWE superstar, I think Braun Strowman would be a good suggestion. Promoted and pushed heavily but never thought through and failing to deliver what was promised. Perhaps that is unfair on Strowman, but the WWE Women’s Tag Titles were introduced with loud fanfare and pushed heavily on WWE’s social media outlets. This was going to be the next step in the Women’s Evolution and become a cornerstone of the WWE Women’s Division. Except, it didn’t really happen, did it?

The first champions Bayley and Sasha Banks lost the titles in less than two months and apparently weren’t happy about that. The IIconics’ run was terrible and booked like an afterthought. Peyton Royce and Billie Kay tried hard and were very vocal during their promos, but they lacked feuds and were often not even on shows – disappointing considering the titles were intended to be a cross-brand promotion. That being said, recent weeks have shown a new impetus behind the titles, perhaps down to Paul Heyman’s influence? The titles have been held by the Kabuki Warriors, Asuka and Kairi Sane, who won the belts in early October at Hell in a Cell. Since then, they have been prominent on TV, defending the belts on NXT this past week and also making regular appearances on Raw where one or both will be in competition. Perhaps the change of character has had a positive influence on the titles. Heels work well as titleholders as it gives opportunities for face teams to chase the gold. It also helps that both women work extremely well together and work as a unit – much like Gallows and Anderson of the OC. I don’t think it can be underestimated how much better a tag team looks and performs when they work as a team and not two individuals thrust together to make up the numbers. Long may it continue for the Kabuki Warriors.

The Top of the Tree

Since Wrestlemania, Becky Lynch has been firmly placed atop the WWE Women’s Division, and rightly so. She is the most popular female superstar in WWE and is a huge talent. Her matches aren’t formulaic and she is evolving with every passing week. She fully deserves to be carrying the Raw Women’s Title. Over on Friday Night Smackdown, Bayley has embraced her new persona (and very nice hairstyle, may I say) with aplomb and has become the character many fans have been wanting to see for years now. Change can be good, and in Bayley’s case it has been a real breath of fresh air.

But having Bayley and especially Becky now in spots they look like holding for some time, surely this should allow a fresh influx of challengers for them? Unfortunately this hasn’t been the case. There appears to be an insistence on pushing Lacey Evans, but for whatever reason, she doesn’t look like getting any traction and her character is suffering as a result. When she was on Smackdown, Charlotte Flair was ever-present in the title picture and is nailed-on to be booked purely to topple her father’s number of title reigns. It’s sad that such a talent is seen long-term as a record breaker, but to do so has to lose multiple times in the process. It’s not known what role Flair may have on Raw. Over on NXT, the women’s division is quite formidable with Shayna Baszler, Rhea Ripley, Tegan Nox, Dakota Kai and Io Shirai causing so many waves that NXT has announced the first ever Women’s War Games – which should be epic.

So for all that said, what is there to gripe about? How about the absences? The lack of screen time for so many talented women on the roster? Where is Nia Jax? Ember Moon? Even if injured, can’t they still do promos? Has Nikki Cross been diluted from the character she came into WWE as? Why? Don’t we all want something different? How about the IIconics? Sarah Logan? Mandy Rose? Have WWE turned their attention on pushing faux feuds on Total Divas! rather than on WWE television? Do we need to see Sonya Deville and Carmella causing drama on E! instead of inside a WWE ring? Is Natalya cursed to be a ‘safe pair of hands’ for the younger talent coming through or should she be pushed into the title picture?

What do you think? Has the Women’s Division improved so much it cannot be criticized, or is there always room for improvement? Do you think it hasn’t evolved and if so, what would you do to put it right? I’d love to hear your thoughts. As always, thanks for reading.