The professional wrestling business is a unique place full of strange characters and performers. When it comes to tag team wrestling, oftentimes teams are formed based on two performers having a similar skillset and then working together as a team. Sometimes you might see a team that is formed where one wrestler is the smaller guy while the other guy is big, so they make a good combo that way. Think of Shawn Michaels and Diesel as an example of that.

Then there are the times when two performers who don’t look the same and have nothing in common end up being a team simply because the fact that they look weird together is going to get a reaction from the crowd.

Mick Foley had a legendary career that was actually based on him being an odd wrestler character. His “Three Faces of Foley” run in the late 1990s was very enjoyable for many reasons. Because of that, there are three different Foley-related teams with three different characters that are among the oddest wrestler tag teams ever. It just how diverse Foley was.

In order to consider a team successful for the sake of this list, they need to have had at least one tag team title run together. If a team worked together for months or years to never win anything then they really can’t be considered that much of a success, right?

Here are ten of the strangest teams in WWE history that ended up winning gold together. 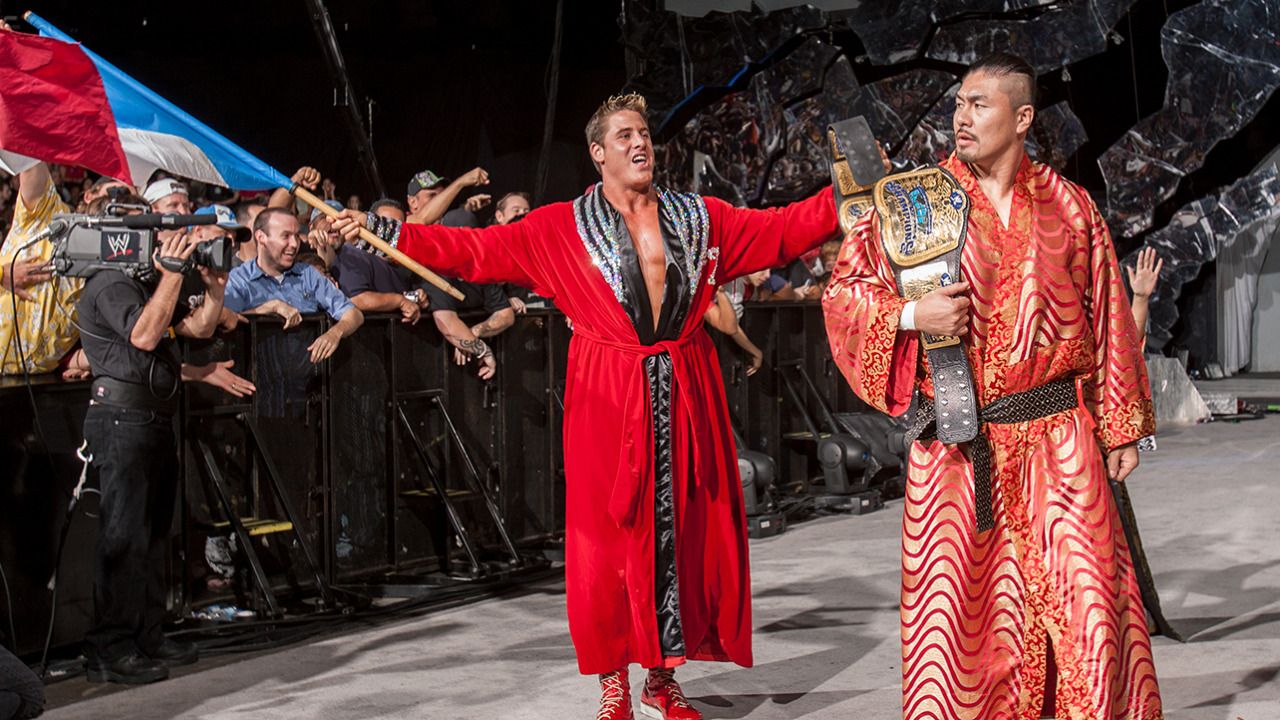 You may not remember the team of Suzuki and Dupree and that’s okay because it’s not like they were this legendary team that had a glorious run teaming together. However, they did have a moment in their careers where they were WWE Tag Team Champions on the Smackdown brand.

Since Suzuki is a Japanese wrestler that didn’t cut promos and Dupree was a Canadian from Quebec that didn’t do much more than his signature French Tickler dance, they really didn’t have much in common. The only thing going for them was that they weren’t American, which was enough for them.

Their mostly forgettable tag team title run began in September 2004, lasted three months and then both guys were phased out soon after. 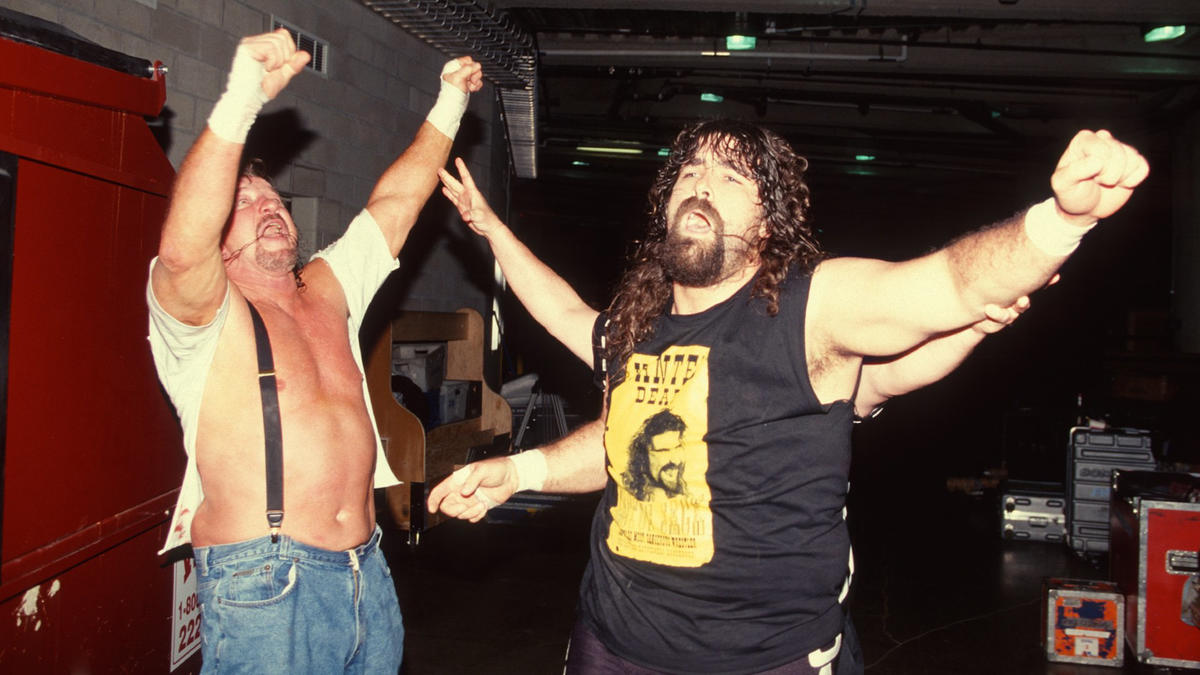 The first of Mick Foley’s crazy tag teams was the partnership he formed with Chainsaw Charlie (Terry Funk) in 1998. It was weird to see these two awesome performers teaming together using names that weren’t necessary because fans knew their main names already, but due to their craziness, the duo worked well.

Why would WWE put Funk in an outfit like Chainsaw Charlie and have him wear pantyhose on his head? It put over the idea that he was this wildman, but it’s also pretty stupid.

Their lone Tag Team Title win lasted a day because they used the wrong dumpster in a Dumpster Match and when they weren’t teaming together, they were oftentimes fighting eachother because that’s what crazy people do.

When William Regal and Tajiri worked together in 2001 they had this amazing chemistry that saw them provide comic relief a lot of the time. WWE loved to book Tajiri as this bizarre Japanese wrestler who could say or do weird things while Regal was always one of the funniest performers in the company. He just carried himself like this distinguished English gentleman even though he was a bit of a fool a lot of the time.

By the mid-2000s, neither man was doing that much so they teamed up in 2005 and won the Tag Team Titles from La Resistance in Japan. It was a really good match that led to a massive reaction from the crowd because Tajiri won the gold in his home country. That’s probably one of the best moments of his WWE career and it was partly due to Regal because they worked so well together.

Good chemistry is so important in wrestling. These two always had it when they worked together. 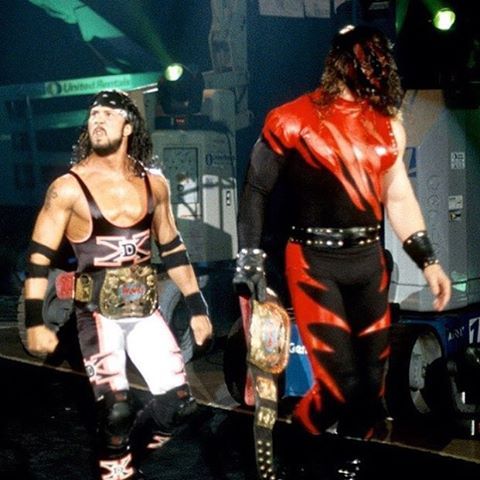 What was so great about Kane teaming with X-Pac in 1999 is that it came at a time in Kane’s career where he rarely showed emotion. He was a monster heel wrestler when he debuted in late 1997 and through most of 1998, but X-Pac ended up being his friend that helped him get out of his shell.

There were a lot of fun moments in those days when Kane would finally muster up the courage to say something and when he uttered a phrase like “suck it” for the first time it drew a massive pop from the crowd.

They ended up having two Tag Team Title wins in 1999 and while neither run was that significant, they showed that a skilled little man teaming up with a silent monster could be very effective when they were on the same page. 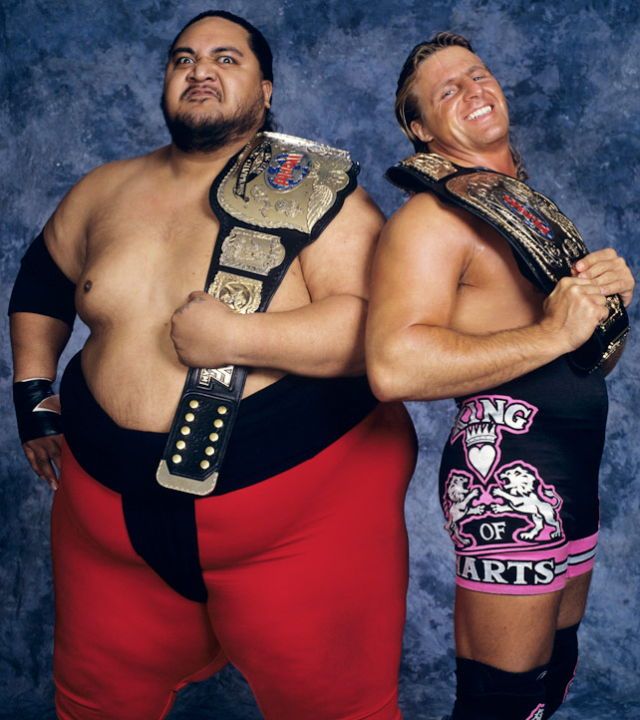 A fun team from the mid-1990s. The technical wrestling skills of Owen Hart were a perfect match for the massive Japanese (really Samoan American) former World Champion known as Yokozuna.

The team was formed in 1995 at a time when Yokozuna was out of the WWE Title picture while Owen was no longer a top contender. They worked so well together because Owen was very good as a chickens**t type of heel that could hide behind Yoko, who was so good at hitting power moves to flatten his opponents.

They are recognized as having two Tag Team Title runs with the first one going for 175 days, which shows that they were pretty dominant as the champions.

5. The Colossal Connection (Andre The Giant And Haku)

Andre The Giant is one of the most famous and successful wrestlers in the history of the business. He was a dominant force that rarely lost any matches, but as he got older through the 1980s he wasn’t able to work as much due to his body wearing down.

Since Andre couldn’t work as a singles wrestler anymore, they had his manager Bobby Heenan pair him up with Haku, who was from Tonga. There was this 7’5″ 500 pound French guy with this Samoan that looked so mismatched, yet they were able to win the Tag Team Titles in 1989 and held them for about four months.

Their run didn’t last that long because Andre famously turned face at WrestleMania 6 in 1990, but when they were together they showed that two guys who look nothing alike could be very effective after all.

The gimmick of “Stone Cold” Steve Austin was pretty simple. He said the phrase “don’t trust anyone” because he had no interest in being part of a team or group with anybody.

Austin originally won the Tag Team Titles with Shawn Michaels in May 1997, but Michaels was suspended soon after and Austin needed a partner. That’s when WWE decided to turn Foley into a comedic babyface with the Dude Love character, so he ended up as a tag champ with Austin.

It was hilarious to see the constantly angry Stone Cold character teaming up with the goofy, dancing fool known as Dude Love. However, they were such great performers that they found a way to make it work and they’re a team that will never be forgotten.

Booker T and Goldust were one of the most entertaining tag teams on Raw when the first brand extension took place in 2002. They really didn’t interact much before that, but they became a unit when they realized they were a couple of midcard babyfaces with nothing else going on. It just seemed like a great fit even though Booker T was known as a badass with a serious attitude while Goldust was a face-painting guy with a goofy side to him.

This is another one of those teams where you look back on them to see that they only had a 22 day reign as Tag Team Champions. That doesn’t seem right because they were great together, but WWE did do an awesome job of building up their win as a big deal. When they won, it mattered a lot.

There were so many fun moments with them like entertaining backstage skits with The Rock to hilarious movie reviews that did an awesome job of putting over both of their personalities. It’s easy to smile while thinking about them because they were a lot of fun to watch.

Due to Daniel Bryan’s popularity as this crazy, egotistical man that shouted “no” all the time, WWE had to turn him into a babyface in late 2012. In order for him to get there, they needed to pair him up with another crazy character, so Kane was a perfect choice as they became Team Hell No.

They went on to win the Tag Team Titles in September 2012 and held them for 245 days. It was a really long reign that featured a lot of great matches since Bryan is arguably the best technical wrestler in WWE while Kane is a popular big man that knows what he’s doing out there.

It was a weird team that made things work thanks to their therapy sessions, the hugs and turning those “no” chants into the popular “yes” chant that became a regular thing for Bryan.

1. The Rock N Sock Connection (The Rock And Mankind)

The most bizarre team of all time was The Rock N Sock Connection, which was the name given to the charismatic Rock and the oddball known as Mankind. They were two performers with two distinctively different looks (Rock was flashy, Mankind looked like a bum), yet they were able to come together to form an alliance to win the Tag Team Titles three times.

What’s interesting about their three reigns as champions is that they only held the titles a combined 15 days, so it’s not like they had glorious runs.

It’s their uniqueness that made them stand out. They were able to have some of the most entertaining moments during the Attitude Era when they did stuff like the “This Is Your Life” segment that ran nearly 30 minutes and drew huge ratings. It was just two guys doing funny promos, yet they made it so funny that viewers were compelled to keep watching.

Even though they didn’t look like a typical tag team, The Rock N Sock Connection absolutely worked as well as any strange tag team in WWE history.