The Class of 2002 is widely regarded as one of the greatest crops of wrestlers to come to WWE at the same time. In one developmental class, you had John Cena, Brock Lesnar, Batista, & Randy Orton. So who’s the best of the four? It will probably surprise you, but my choice is Randy Orton. The other three may be more marquee names, but both Lesnar and Batista have taken extended hiatuses from the business since they debuted, and I would say Orton is far more consistent in all areas over Cena. In fact it is my honest opinion that Randy Orton is the greatest wrestler of this generation (any wrestler starting his career post 2000) just beating out Kurt Angle. I’m sure that will get scoffed at and dismissed entirely, but when you look at Orton’s entire body of work, there are no flaws. He outgrew his maturity issues, his early signs of being injury prone, and turned into the most natural wrestler of this century.

He’s also currently the most overlooked superstar in WWE. He’s clearly the #2 full-time guy in WWE right now, but go ahead and start planning a SummerSlam card for the big event in five weeks. How many matches do you get to before you even get to Orton? Do you even get to Orton? One would have to assume that a rematch with Sheamus is in the works, but how logical is that when Orton won cleanly in a 16+ minute match? There’s no basis for needing a rematch. But Orton will make the best of whatever he’s asked and he’ll go about his business.

The funny thing about Orton is that even though his career parallels with Cena’s, Orton is nowhere near as polarizing as Cena is. Orton is a 12-time World Champion compared to Cena’s 15 reigns, Orton’s spot near the top has been nearly as protected as Cena’s has ever since their amazing set of matches in 2009, and yet no one goes up in arms when Orton goes over on people like Seth Rollins at WrestleMania or Sheamus at Battleground. People holding the MITB briefcase are typically not protected as a whole, but if you replaced Orton with Cena in those two matches, the population would be in an uproar that Cena is preventing them from being the next top guy and they’ll never cash in their briefcase successfully. That is of course until Rollins cashes it in later that night.

Those are just a couple recent examples, but when you go back to those series of matches of theirs in 2009, it’s an interesting thought to wonder what would’ve happened if you had flipped their careers. At the time of their series, Orton was reviled by the WWE Universe. He came across as an arrogant asshole, who took forever to get to the ring, and was slow and plodding in the ring, all while having a quick temper that could go off at any moment. How ya doing Kofi? Cena was at the peak of his popularity. The anti-Cena movement was there, but it was the minority. That all changed after their I Quit match at Breaking Point. That was the first real example of the Super Cena negativity that followed Cena everywhere and turned the crowd on him. Orton was looked at so sympathetically after that, that he was turned face just months later, turning on his Legacy partners after a solid 5 year run as a heel. 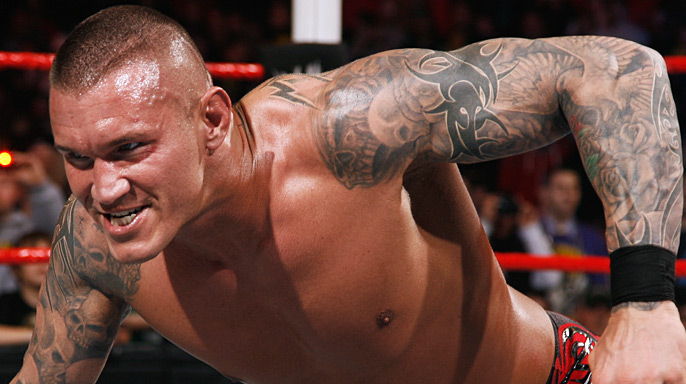 It’s reasons like these above that Orton is what I call “The Teflon Superstar”. Nothing sticks to him, good or bad. Where Cena is dogged constantly for holding wrestlers down, Orton has faced off against just as many upper mid card guys that wanted to break through that glass ceiling, but there’s never an uproar on Orton refusing to let those break the glass ceiling.

If you want an example of proof, think back to 2011 when everyone was on cloud nine for Christian finally winning the World Heavyweight Title and the emotional story of doing it for Edge. Does anyone remember that it was a mere five days later that Randy Orton defeated Christian for that title? Now put Cena in that same situation. There would be riots.

Think back to that time when Orton did turn face and went against Cody Rhodes and Ted Dibiase in a glorified handicap match at WrestleMania. The two youngsters had come off the push of their careers, defeating the likes of HHH and Shawn Michaels, but when Orton easily dispatched of them, there was no outcry of injustice. There were thousands and thousands of fans yelling at the top of their lungs, excited to see what Orton would do as a babyface.

Cena is in the midst of a career Renaissance right now and is consistently praised for every good match he has. People go out of their way to talk about how good Cena is, considering he’s managed to overcome the “Five Moves of Doom” stigma. Orton has had tremendous matches with Bryan, Christian, Rollins, Sheamus, even people like Kane and Mark Henry, but when Orton has a great match, it’s just another day at the office. Again, nothing sticks to the guy.

How he got to this point is an interesting question. It doesn’t hurt that he has the last iconic finishing move in WWE, maybe in all of pro wrestling. Fans still lose their minds when he hits the RKO. The fact that he’s almost made a game of how to find new ways to deliver it, only adds to the legend of the maneuver. I think more than that though, the fans view him as one of those guys that actually did break through the glass ceiling.

Despite his protected standing in the company now, Orton wasn’t handed the world on a silver platter like Cena was. A lot of that was Orton’s fault, which he admits himself for his attitude issues and not getting it. There was a time after his first World Title run failed after just a month as champion, that people felt he would be fired before he was ever World Champion again. When the successful partnership with Edge in Rated RKO was broken up, it was clear that Edge was the guy that would get the push. He was the Michaels, Orton was the Jannetty. So when Orton finally broke through and won the title again, ironically due to a Cena injury where he had to vacate the title, the fans were actually happy that Orton was given the opportunity again. It had been a long three years for Orton.

So while everyone makes plans for all the top superstars for SummerSlam and ultimately WrestleMania next year (the card that I couldn’t even find a match for him myself), he’ll just be in the background, doing what he does best, being one of the greatest wrestlers we’ve ever seen while somehow managing to be overlooked at the same time.

We’ve never seen a superstar like that before, and we may never see one again.

What’s your take on Orton in today’s WWE? Let me know in the comments below.