I am not a Matt Cardona fan. In fact, at no point or any time was I ever a Zack Ryder fan. But, just because I am not a fan of him, his character, what he says, his attire, or moveset doesn’t mean I don’t recognize that others are fans of his. To know about Matt Cardona now is important to know about him back when he first came into the WWE.

Cardona originally joined WWE after his time training under former ECW talent Mikey Whipwreck. From there, he went to their developmental territories in OVW (Ohio Valley Wrestling). It was clear he was emerging into something special. At that time, Cardona would be brought up to the SmackDown roster and join Curt Hawkins (Brian Myers) as part of La Familia as Edge’s Edgeheads. With Myers and Cardona’s long hair made them an easy fit to be part of the group. In addition, their look made sense because they easily resembled Edge. It even led to them getting involved in Edge’s WrestleMania 24 main event match against The Undertaker.

However, after La Familia came to an end, Ryder’s and Hawkins’ roles served no purpose. What no one could deny was that Ryder was committed to ‘getting over.’ Fans needed to see what he saw in himself. With that came the emergence of a YouTube show and an uncanny ability to use social media to make a statement about not only him but what he was caple of doing.

In fact, videos of him attempting to climb a fence and failing to get to the other side as he would say ‘I can’t get over’ was both funny and ironic. But unbeknownst to the WWE management, slowly but surely, Ryder was getting over.

“It was way before The Jersey Shore. I was with Curt Hawkins as the Edge Heads—a long haired blonde kid. And I needed a change. I needed something different. So I just took my real personality, turned the volume way up, cut the hair, went to all the clubs on Long Island, like GLO, and fist pumped with all my broskies until I finally found who I really was, and portrayed it to the world, throwing up the ‘LI’ hand signal”.

Ryder on his character after he stopped teaming with Curt Hawkins.

The Internet Champion was born, and with that birth came a new sense of purpose and a new direction for now known ‘Long Island Ice Z.’ He would feud with Kane, have an on-screen girlfriend in Eve Torres, and capture the United States Championship. Things were ultimately going well for Zack Ryder. In fact, he was part of a group photo of champions that circulated, showcasing a pretty beloved group of talent that would fall under the category of ‘internet darlings.’ Kofi Kingston, Evan Bourne (Matt Sydal), Beth Phoenix, CM Punk, Cody Rhodes, Zack Ryder & Daniel Bryan (Bryan Danielson) would all be pictured together. The picture represented a special time for the WWE. It was also a special time as Ryder was over with the WWE Universe at the time as well. 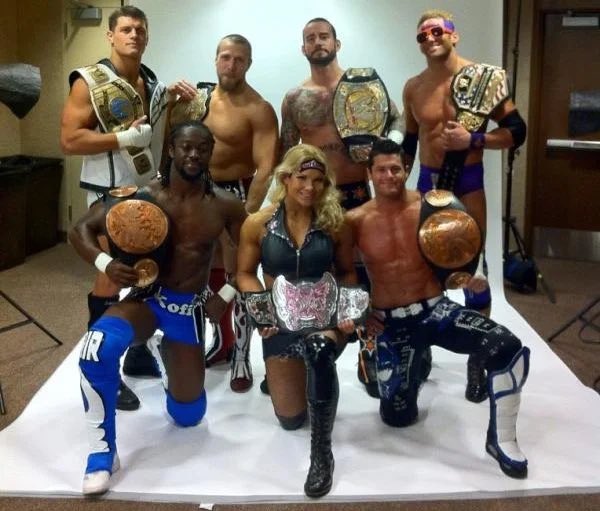 But after all the notoriety he gained during those earlier years, things had changed. Without question, he was booked differently than he was in the past. All his efforts now weren’t being utilized, and he was booked further down on the card. While his attempts didn’t dull the shine off the Zack Ryder rise, his rise slowly became a decline.

With a lack of direction, Ryder would move from Raw and SmackDown over to NXT. While in NXT, Ryder would team with Mojo Rawley to form The Hype Bros. A name that is certainly indicative of both men’s personalities. While the duo did pick up wins, it didn’t lead to a title reign. For Ryder, it didn’t necessarily matter because he was being used and with that also came for him to mentor the younger Rawley.

After Rawley turned on Ryder and the duo split, time would pass, and with that came opportunity once again. Here Ryder would once again team up with his former tag team partner Curt Hawkins. Hawkins was in the midst of a winless streak that ended with a championship win. As unfathomable as that may have seemed, it did give Ryder and Hawkins a chance to come together once again. Thus, the duo would end their time in the WWE as two-time tag team champions after capturing gold at WrestleMania 35.

However, on April 15th, 2020, after nearly 12 years with the company, Zack Ryder was released by the WWE. As customary with all talent on the main roster, Ryder had a 90-day no complete clause. Once that clause ended, it also resulted in the end of Zack Ryder, as in he was dead!

From Zack Ryder’s ashes came a man who had spent time stewing over his departure from the company and how he was going to reinvent himself. Matt Cardona not only reinvented himself, but he also put himself in a position where he was the buzz of the internet for the Summer of 2021. He would first get noticed by Game Changer Wrestling Champion Nick Gage. Gage would continue to refer to Cardona as ‘Zack Ryder.’ As time passed, Cardona would ignore Gage’s attempts to reach out to him. Then suddenly and without an expectation, Cardona would strike.

Dressed much like a druid all in black, Cardona would hit Gage with the paradigm shift. When he did, it gave the fans the impression that it was Jon Moxley under the mask. However, once the mask was removed, Matt Cardona revealed himself to be the actual culprit. An absolutely stunned GCW crowd was in a frenzy as ‘Zack Ryder’ had attacked their champion. Cardona made a statement. That statement was that ‘Zack Ryder’ is dead and Matt ‘F’N Cardona is here! The two would cross paths at autograph signings and ultimately face each other for the GCW title. The result was a shocking win for Cardona, who called himself the King of the Deathmatch. Matt Cardona was the NEW GCW Heavyweight Champion!

The response on social media was nothing short of the kind of heat wrestlers dream of getting. Cardona had managed to infiltrate the world of deathmatch wrestling and made himself public enemy number one. And he loved every minute of it.

Cardona would then defend his title against Nick Gage only to be guilty of the same thing he did to Gage. A masked man hit Cardona with a paradigm shift only to reveal himself. It was JON MOXLEY who would defeat Cardona to become the new GCW Heavyweight Champion. This was a markable feat in that an IMPACT Wrestling talent faced an AEW talent for a title that represented the top independent wrestling promotion in North America. Cardona and Moxley were creating a buzz for themselves that allowed them the freedom to control the narrative.

Since this took place, Cardona became embroiled in a feud with EFFY. EFFY, for those that aren’t aware, is a longtime independent wrestling favorite for several promotions. One of which is Game Changer Wrestling. As it turns out, EFFY would defeat Matt Cardona for his ‘Internet Wrestling Championship’. It feels as though things had come full circle for Cardona. He was as committed to getting over as he was getting those around him on the independents over as well. Cardona has taken control of the narrative and found new life.

To his credit, Cardona has done everything he knew he could do now with the freedom to do it on his own. Whether we love him or not, Cardona is turning heads, showcasing creativity, and proving that he can still get over.