Any fan of wrestling has at one time or the other dreamed of one day competing in the ring themselves. The dream of main eventing WrestleMania and holding the WWF Heavyweight Championship was one I personally had often as a young boy.

As I grew older, however, and realized that I was not what one would call “coordinated”, it soon became painfully apparent that it was just going to be a dream. When my brother Brian asked me to go with him to start training with him at the Institute of Professional Wrestling at The Great Northern Mall, I audibly laughed in his face. I quickly explained to him that I had just turned 40, and was not what one would call “in shape”. Realistically the conversation should have stopped right there and then, until my brother decided to remind me that “DDP was 35 when he started training.” Suddenly all those wrestling fantasies I had as a young boy came streaming back, as I thought maybe my brother is right. Maybe all I needed to do was a little yoga, feel some bang, and all of a sudden I would be a world champion. (For what it’s worth, the original title was going to be “Too Fat And Old To Wrestle” but John Canton edited it for me. He’s a professional like that!)

Those are the series of events that suddenly had me showing up on a Thursday evening to begin my training under the expert tutelage of Zachary Springate III and Isys Ephex. Isys and Springate are legends of the local indy wrestling scene here in Syracuse NY, and I was truthfully excited to be learning from them.

As I walked in to that first class and instantly noticed that I was surrounded by much younger and athletic men and women, I almost turned right around and walked out. “DDP,” I kept telling myself as my trainers told everyone to line up for ladder drills. Ladder drills are designed to work on your agility, balance, speed and quickness. About 30 seconds in it was painfully apparent I had none of these, and no amount of yoga was going to fix that. After 15 minutes of these drills, I looked like Goldberg after wrestling an Iron Man Match. 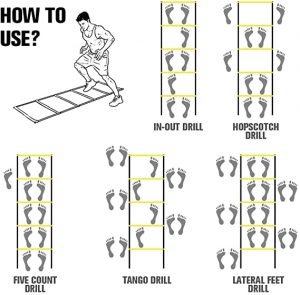 After my near-death experience with the ladders, Springate took me into the smaller ring while the more experienced wrestlers went into the full size ring. Springate then proceeded to teach me the most fundamental wrestling move; the lock up. As I practiced locking up over and over, I started getting better at it and my confidence began to grow once again. Maybe I won’t be the most athletic wrestler, but I was going to awe the crowd with my lockups. Unfortunately for me, suddenly lockup practice ended; it was time for everyone to do rope drills in the large ring. Rope drills are the art of learning how to get thrown out of the ring to the floor in various ways. I then proceeded to throw myself through the ropes and then over the top rope both forward and backwards, smacking my back and knees on the apron several times. Throughout the years, I have watched men be thrown off ladders and miraculously get right up and keep going; I am not one of those men. By the time I woke up the next day after that first day of training, I was pretty sure my wife had decided to kick the crap out of me while I slept.

Regardless of what my body was loudly telling me, I did enjoy wrestling class and continued to go back every week. Each week I have show small improvements as well, going from not being able to do a simple forward roll to eventually being able to not only roll, but run the ropes as well.

My main trainer Isys is incredibly patient with me through this, as he works with me each week to make these small gains. When compared to the guys like Corey Jackson, Ting, Denim Kovic, Mark Zeal,Adam Stone and Mike Skyros, all of whom have been wrestling on local shows, I am nowhere near ready to wrestle. Even when compared to my brother, who was taking bumps and beginning to learn wrestling sequences, I had fallen way behind. I had begun to believe that I would never actually be a part of a wrestling show, until suddenly I was asked if I wanted to help out at a local company called NYCW’s Three Year Anniversary Show.

NYCW is ran by a man affectionately known as Patches. Patches is basically Tony Khan without his father’s checkbook. Every wrestling fan has fantasy booked a wrestling show at some point of there lives. Patches, however, has actually put his money where his mouth is and made that fantasy a reality.

I drove up to that NYCW show four hours before it was scheduled to begin so I could help set up the ring. I have been a wrestling fan for over 30 years, but did not truly appreciate what it takes to run a wrestling show until that day. By the time everything was all set up, I was more blown up than the Ultimate Warrior running to the ring. I then proceeded to sit behind the merch tables as I watched my fellow students Corey Jackson, Marie, Denim, Adam Stone and Mark Zeal tear it up in the ring. I was truly content that this was going to be my place in the wrestling world, until I noticed the guy in the stripped shirt in the ring. NYCW only had two referees to work the entire show, so I decided to ask Patches if he could use a third. A few minutes later I had my first booking as a referee at NYCW Tag Team Turmoil on November 6th.

I spent the next month of my training focusing on learning how actually to be a referee. Luckily for me, legendary 2cw referee Patrick Fenton showed up for some of those trainings, and helped me immensely. By the time November 6th came around I felt somewhat confident that I could be somewhat competent as a referee.

I drove up with my friend AJ who is also training with me and once again worked my butt off setting up the ring. I then went and found out I would be reffing four matches in total that night, and went to go find the wrestlers I would be working with. As I went and found the guys and girls whose matches I would be refereeing, I was struck by how much thought and effort they all put into their matches. As I went over any spots as well as the finishes with them all, I could only think about not wanting to mess up their matches. 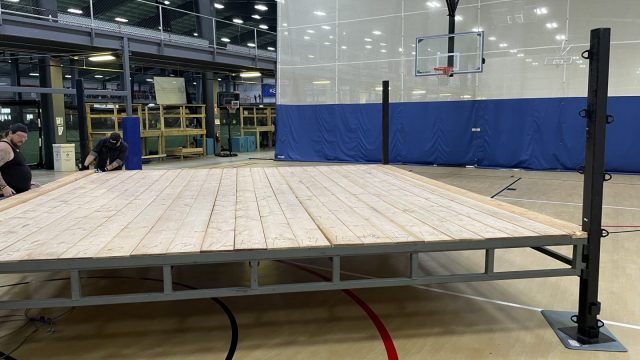 As my wife, kids, AJ and my brother, Brian, all watched from the crowd, it was finally time for me to step into the ring and referee my first official match between Foxx Vinyer and Elijah Crews. As the bell rang, luckily my training kicked in as my nerves settled and the match went off without a hitch. After watching wrestling from the stands for over 30 years, being inside the ring as the show is going on was an amazing experience and truly a “boyhood dream come true.”

My next match was a triple threat women’s match between PJ the Whip vs. The Nocturnal Bombshell Vora and Corinne Minx. Refereeing a triple threat match was a whole new experience, and honestly something I had never trained for. With there being no disqualifications, I had to ignore my instincts to start counting or correcting the wrestlers. Once the bell rang, I felt very comfortable, as the three women had a very good match.

After refereeing those two matches I had a short break before having to work my other matches. I was able to then go up and sit by Patches and watch some of the show, including a match between Impact Wrestling Champion Moose and The Madness of Trip. Moose was without question the biggest “name” on the show, but did not act like it at all. 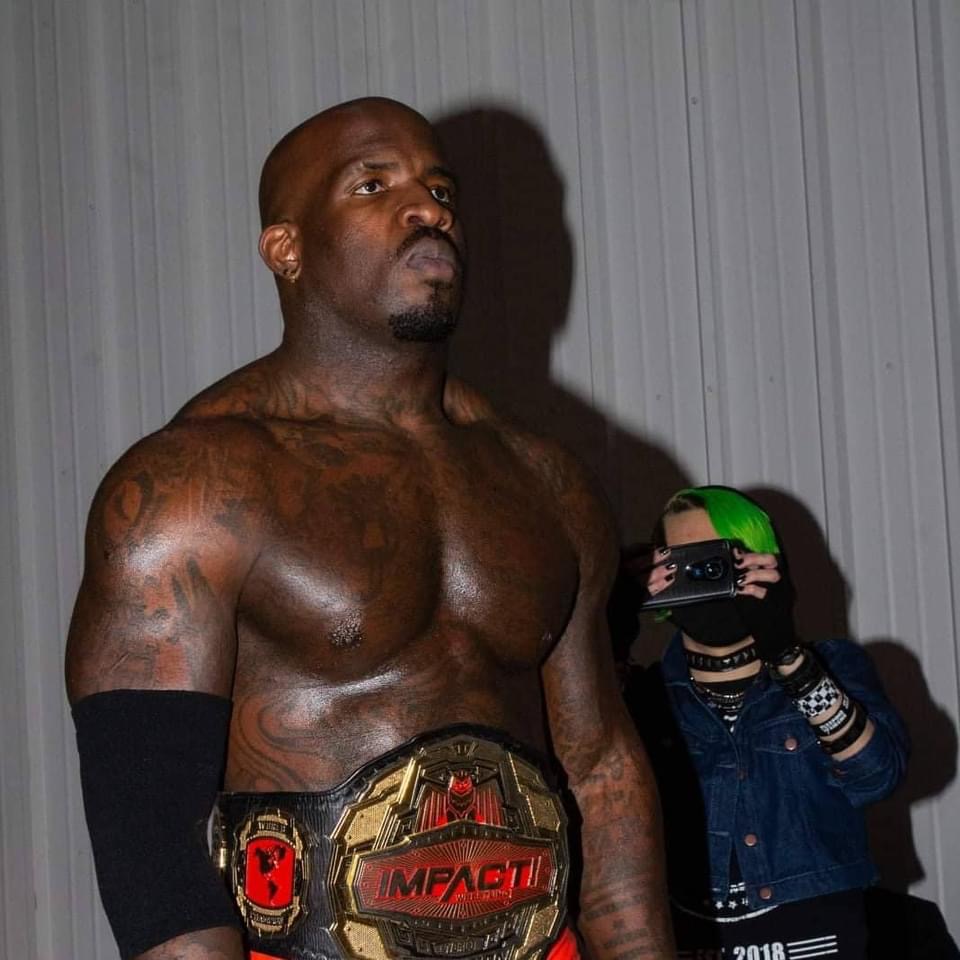 Moose showed up hours before the show started and stayed to the very end, talking to everyone while he was there. Moose and Trips had a incredible match, with the crowd giving them several “this is awesome” chants. I also got to watch my fellow trainee Corey Jackson tear down the house with Black Roze for over fifteen minutes.

So let me just say that at NYCW @NewYorkChampio1 tonight Moose and @MadnessOfTrip tore the house down in an INCREDIBLE Match! Crowd was on their feet. pic.twitter.com/hlt2tYLJZh

My next match refereeing was for Dante Dio vs. Jon Spoor. This match was unique for me as the competitors asked me to have a “spot” in the match. The finish saw Spoor have Dio in a crossface, and think that he tapped out instead of getting to the rope. Spoor then broke the hold thinking he won, with me having to tell him that Dio did not tap out. Dio then small packaged Spoor for the win. After the match, Spoor brutally attacked Dio, with me having to get physically involved to stop him. Luckily both Dio and Spoor are true professionals, and I didn’t end up hurting myself. 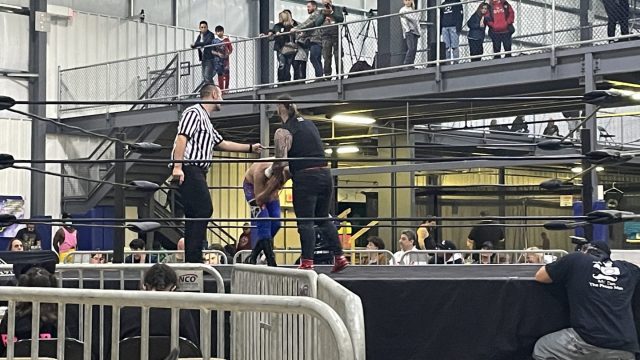 My last match was by far the one I was most nervous about, as it was a tag team match between two of my fellow trainees Adam Stone and Mark Zeal known as Power Supply facing Jimmy Limits and Maddog. I was nervous all night about messing a match up, but being in the ring with two guys who had helped train me and treated me as an equal for the last four months intensified it. Adding to my nervousness was being told by Adam: “To stay in the ring after the match, because Maddog is going to do something with you.” My concerns were for naught however, as all four competitors were great, and the match ended up being excellent. After the match, Maddog and Limits blamed me for loss, with Maddog choking me in the corner. Luckily I was saved right before I would have had to take my first bump in the ring. 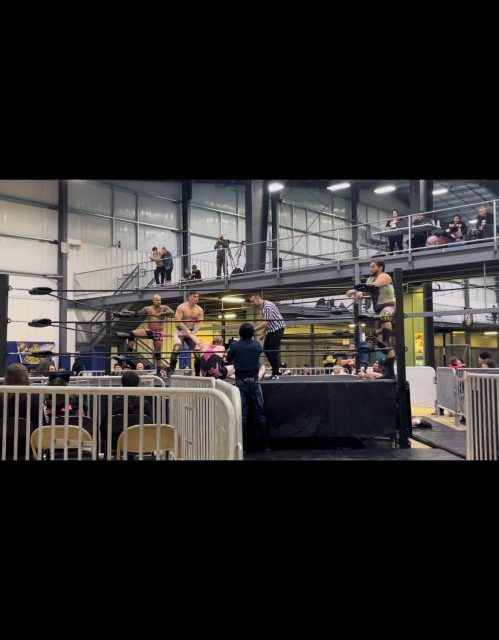 After the show was over I helped take down the ring and was thanked by Patches, who invited me to referee again at their next show.

If you are not doing anything on December 4th, come on out to NYCW Winter WonderSlam at the Accelerate Sports Complex in Whitesboro, NY to see a lot of great wrestling and a referee who was too fat and old to wrestle.

If you missed @NewYorkChampio1 Tag Title Turmoil last night, you missed a LOT! @MadnessOfTrip proved he should be knocking on the door of Championship Gold.@facelessones666 showed they are STARS. @Coreyjackson315 vs @Blackrozestory was TV worthy!
Dec. 4th Winter Wonder Slam! pic.twitter.com/o3LiP1vtxp

Thanks for reading this column that was different than my usual article about the top ten wrestling stories of the week. If you like what I do, then feel free to listen to my brand new podcast The Smark and the Noob and follow me on Twitter @Fowlerwrestlin1 as well.