The twists and turns on the road to Wrestlemania are beginning to ease now, so WWE is hitting top gear and switching to the Fastlane, speeding towards the biggest, loudest and grandest show of the year, Wrestlemania. With just one more Raw PPV to enjoy before we get to mania, there’s a little matter of the Universal Title to decide. The recently-returned legend that is Bill Goldberg, versus the cocky, brash, larger-than-life Kevin Owens. Which way will this one go, or more appropriately, which way should it go?

Now, I’m going to try and play both sides here and not look at it from a WWE fan’s perspective, so I’ll get my personal viewpoint out of the way first; I want Owens to retain. I don’t care about Goldberg winning the title. I don’t care if it’s a factor in a Wrestlemania match against Brock Lesnar – more to the point, I don’t want that belt to be around the waist of a part-timer in WWE. Are they legends and draws? Of course, but history tells us that absent champions do not lift a weekly, episodic TV show in the long-term, with the exception of the odd Raw or PPV when said legend makes an appearance.

I’d rather Owens beats Goldberg – I honestly don’t care how. I’d take a count out, DQ or failure to appear if it meant Owens headed to Mania as the champ. The potential going forward with KO as champ is huge and with many opponents for him to defend against. It also gives the man himself more credibility headlining WWE’s biggest show to fight against a Rollins, Balor, Strowman, Jericho or Reigns. Then you have the whole year to build and bring together feuds across the board, week in, week out. Not once in a while when the legend decides they’ll appear on Raw with the belt. A show without the champ would suffer, in my opinion. I know there are other belts to focus on, but the main Heavyweight title is the top of the Raw Mountain. To not have it on display, especially with the champ isn’t good for the everyday fan.

But this is WWE, and WWE is a business and I can’t look at the Fastlane PPV as a fan. I have to look at it as a business decision. The business decision is about money, buy rates, viewing figures and asses on seats – both in the arena and at home watching the WWE Network. I get it. I understand it. That doesn’t mean I have to like it.

The following was typed through gritted teeth.

Goldberg winning at Fastlane will lift WWE viewing figures. That’s not even debatable, it’s a certainty. Goldberg is a name that transcends beyond the current WWE fan base in a lot of areas – that’s not belittling the hard-core and current fans at the moment, far from it. WWE know Goldberg’s name in lights will awaken memories in those older fans who may have drifted away from the current product and pique their interest into checking out what all the fuss is about. That’s one of the points in having him win – these fans who were teenagers watching Goldberg back in WCW now have families, their own homes and most importantly, disposable income that they can spend watching Wrestlemania. It’s a cynical ploy, but from a business standpoint, it makes sense.

With the greatest of respect to KO, Goldberg vs Brock Lesnar is a matchup that would top any Wrestlemania card. Regardless of their previous exploits over ten years ago, their more recent encounters have left fans stunned and imprinted memories that will be difficult to fade away quickly. Here’s a sad truth about being a WWE Fan; I and many others I’d expect, would love to see Owens vs Balor/Nakamura/Rollins etc. at Wrestlemania for the Universal Title. That’s why we’re fans. We love their story and potential show stealing ability on a massive stage. The problem being is that WWE, especially when it comes to Wrestlemania, isn’t overly concerned with what we want to see. We’ll be watching the following Monday and every Monday thereafter. We’re the core market and WWE don’t have to draw us in. We’re already there in the arena or taking time off work to watch live on the WWE Network. WWE’s concern is getting the most money they can out of their biggest, most expensive show. Goldberg getting top billing is the way they’re going to do that – casual fans are who they’re aiming for and that’s just the way it is. 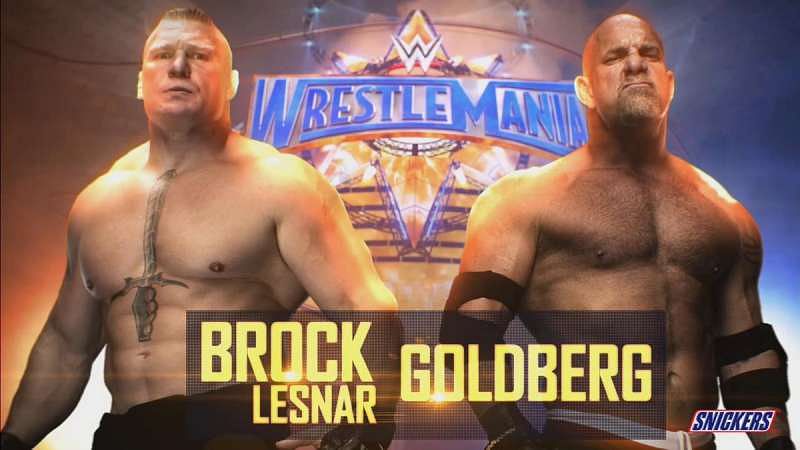 This echoes back to when Punk had to drop the belt to Rock a few years back heading into Mania. I griped about it then, but I understood. Rock knew that the core WWE fan wasn’t happy with the booking, but explained the reasoning behind it by saying his job at that time was simply to ‘elevate the title’ and drop it to Cena. Hard to argue with him there because he’s the Rock – a millionaire, box office star and charismatic entertainer who did just as he was told. He carried the belt with him, promoted WWE and Wrestlemania wherever he went and it worked. We all watched, we all saw and read the hype surrounding Mania that year and the PPV was considered a success.

I’m in no position to say that the Universal Title needs elevating right now, but considering the star power that Goldberg carries, the obligatory TV appearances and promos he’ll do up to Wrestlemania, it’s hard to argue that he won’t bring in more fans, more interest and crucially, more money. Whatever mine or your personal feelings towards the title change, WWE will always do what’s best for them and what’s best for business. We can’t gripe too much though. Goldberg aside, Wrestlemania is going to have some great matchups on the card. Matches I hope steal the show and give the hard-core fans some great memories. I just hope that once Mania is all said and done, the Universal Title is treated with the respect it deserves and the long-time fans get to see the week-in week-out wrestlers climb the summit once again………until the next Wrestlemania.

So, with teeth un-gritted, I’d like to ask if you agree with WWE’s standpoint, or should it matter if Goldberg is the champ heading into Wrestlemania? Wouldn’t the match sell itself, regardless if there was or wasn’t a title involved? Should we just accept that this is just the way it is, and WWE is always going to be a business? What other potential matches will likely steal the show? As always, thanks for reading.