It’s that time of year again. Summerslam is this Saturday and looking at the card, it is pretty stacked with some good to great matches. We’ve heard a lot of people, including Shawn himself, refer to Shawn Michaels as Mr. Wrestlemania. However, who would we classify as Mr. Summerslam going in to the second biggest event of the year? I’ve spent time and done some research and I think I’ve come up with a pretty good choice for that title. Let’s narrow down the Top 5 of the list to see who is really “Mr. Summerslam”.

There are some honorable mentions that will be left off:

* Brock Lesnar is 6-4 at Summerslam with big victories against John Cena, The Rock, CM Punk, and Triple H and big losses against Kurt Angle and Seth Rollins, but I wouldn’t put the match quality or big moments up there in the top 5.

* John Cena was only 5-9, but it is the magnitude of the matches. He defeated guys like Randy Orton and Chris Jericho, but also put over guys like AJ Styles, CM Punk and Daniel Bryan when they needed it the most.

* Randy Orton is 7-7-1 at Summerslam. He has competed in the second most Summerslams ever by defeating the likes of Chris Benoit, The Undertaker, and John Cena and lost to guys like Hulk Hogan, Brock Lesnar, and Drew McIntyre.

* Shawn Michaels rounds out the list of honorable mentions as he was 6-4-1 at the event. He started off slow, but his matches with Razor Ramon, Triple H, the Elimination Chamber, Legacy, even Vader in 1996 prove that Shawn deserves at least a mention on this list.

I came up with a list of five names that could be considered WWE’s Mr. SummerSlam.

The Undertaker currently holds the record for the most Summerslam appearances with 16 (Randy Orton can tie that record if he competes at Summerslam this year), and holds a pretty good record at 10-5-1. His first memorable Summerslam match was, ironically, against a Fake version of himself in 1994. He had been on a hiatus and Ted Dibiase brought in a fake Undertaker until Paul Bearer brought back the real deal at Summerslam 1994. He had a pretty good match with Mankind in 1996, which saw Paul Bearer turn heel and help Mankind get the victory. He lost the next year to Bret Hart thanks to a wild chair shot by Shawn Michaels and lost the following year to WWF Champion “Stone Cold” Steve Austin in a pretty good back and forth match as the main event of SummerSlam 1998. It was probably his only loss up until that point that didn’t involve some kind of tomfoolery, but still three losses in a row. He ended that streak in 1999 as he teamed with Big Show to defeat Kane and X-Pac but that was a pretty bad match.

The Undertaker’s only no contest (the 1 in his record) came in 2000 as The American Badass against Kane. It was a bad match and only ended after Undertaker kept ripping at Kane’s mask and they just fought to the back. He fought WWE Champion JBL to a hard-fought loss in 2004. The ending sucked, but it was a hell of a match that legitimized JBL’s title reign up until that point. He lost again to Randy Orton in 2005. It wasn’t as good as their Wrestlemania match, but The Undertaker did more to make a young Randy Orton in 2005 than anybody since or previously outside of maybe Foley. Undertaker had one hell of a Hell in a Cell match against World Champion Edge in 2008, which was also the main event. He defeated Brock Lesnar in 2015 in a better match than their Wrestlemania 30 match.

“The Architect” Seth Rollins has had quite a memorable run at Summerslam since his main roster debut as part of The Shield in 2012. He has competed in 5 title matches of his 7 total matches, making his Summerslam debut in the corner of United States Champion Dean Ambrose in 2013 before wrestling at his first Summerslam against Ambrose in 2014 in a lumberjack match. He defended his WWE Championship by defeating United States Champion John Cena in a winner take all match in 2015. His only loss at Summerslam came the following year in 2016 when he lost the first-ever Universal Title match to Finn Balor.

Rollins was babyface by 2017 as he reunited with Dean Ambrose to defeat The Bar for the Raw Tag Team Championships. He had a pretty good contest with Dolph Ziggler for the Intercontinental Title in 2018 before getting probably his second biggest win by winning back the Universal Championship against Brock Lesnar in 2019. He was back as a heel by Summerslam 2020, defeating Dominik Mysterio in Dominik’s first match ever. Rollins is scheduled to face “The Rated R Superstar” Edge at Summerslam this year so he could move to 7-1. Only time will tell, but it is definitely one of the most anticipated matches of Summerslam weekend. 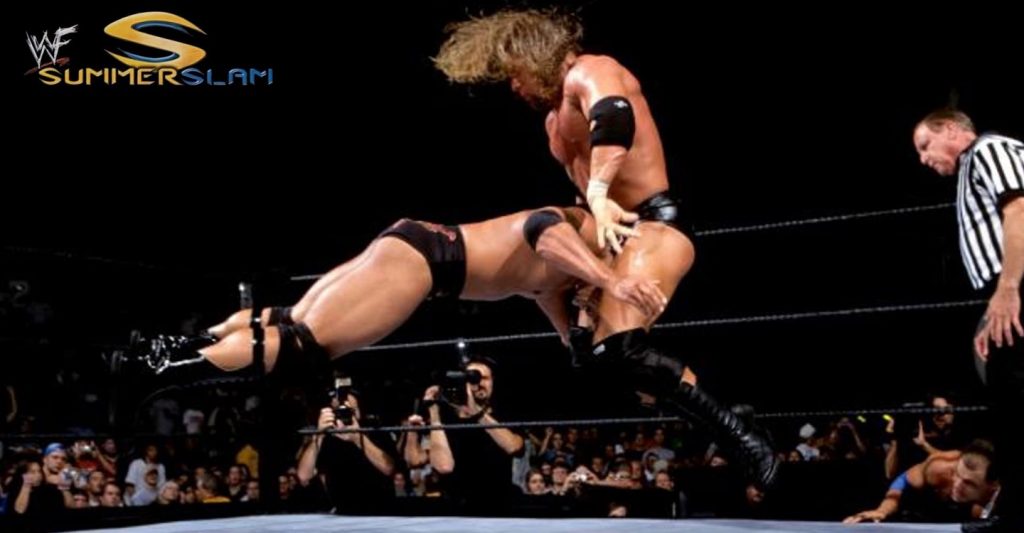 Triple H is somebody that not many people talk about when it comes to Summerslam, but he amassed a pretty good career at the event, even better than his career at Wrestlemania. Triple H’s record at Summerslam is 8-5, having made his PPV debut for the WWF at Summerslam way back in 1995 in a winning effort against Bob Holly. Probably the most famous of his early Summerslam matches came in 1998 in a ladder match for the Intercontinental Title against The Rock. Both stars were up and coming and this match essentially “made” both guys into big-time players for the company moving forward. It was a back and forth, 25-minute match that saw Triple H capture the Intercontinental Title in a match that still gets talked about to this day. The Rock would win his first WWF World Title just a few months after this and Triple H would be in the main event for the WWE Title at the very next Summerslam. Hunter had several other memorable clashes including his loss in the main event for the WWE Title in 1999 against Mankind with Jesse Ventura as the referee in a match that also included WWF Champion “Stone Cold” Steve Austin.

Hunter lost another triple threat for the WWE Title against The Rock and Kurt Angle in 2000 before missing 2001 due to a torn quad. Summerslam 2002 was probably one of his biggest matches as he faced a returning Shawn Michaels in a street fight that went nearly 30 minutes. HBK won, but the match was a classic. He also retained his World Title in an Elimination Chamber match in 2003, reunited with Shawn Michaels as DX to defeat the McMahons in 2006, returned from another quad injury to defeat King Booker in 2007, reunited as DX again in 2009 to defeat Legacy, and a loss to Brock Lesnar in 2012 which was his last Summerslam encounter. Sure, he’s had some forgettable matches like The Great Khali in 2007 and Eugene in 2004 but for the most part, Triple H has always come up big at the biggest party of the Summer.

Edge has been about as dominant as anybody at Summerslam. He made his Summerslam debut in 1998 teaming with Sable to defeat Jackie and Marc Mero. Edge and Christian won the very first TLC match in 2000 in a match that still gets talked about today. Believe it or not, as great as the tag team of Edge and Christian are, that is their last Summerslam match as a tag team.

Edge defended his Intercontinental Title against Lance Storm in 2001, and would defeat the likes of Batista, Eddie Guerrero, Matt Hardy, John Cena (in the main event of 2006), and Chris Jericho while his only two losses were to the APA as part of a tag team turmoil in 1999 and The Undertaker in a Hell in a Cell match in 2008. Edge constantly put on good to great matches, but his TLC and Hell in a Cell matches alone should put him on this list. The Rated R Superstar hopes to add another awesome SummerSlam match to his list this year as he faces Seth Rollins in a highly anticipated contest.

Bret Hart is obviously “Mr. SummerSlam” to me. Bret didn’t have as many wins as an Edge, Undertaker or Triple H, but he had an excellent run of matches at the second biggest event of the year. From wrestling Demolition twice as part of The Hart Foundation to a 1-1 record, although their match at Summerslam 1990 was way better than their first. Another classic against Mr. Perfect in 1991 saw Bret win his first singles title as the Intercontinental Champion followed by an instant classic against The British Bulldog at Wembley Stadium at Summerslam 1992 in a match that still gets talked about today. His cage match with Owen Hart in 1994 was probably his best Summerslam match as he successfully defended his WWF Championship. Bret was on hiatus in 1996, but won the WWF Championship from The Undertaker in the main event of SummerSlam 1997 before leaving the company. Of course, he also had a Summerslam match in 2010 on Team WWF against The Nexus but that isn’t really memorable. He could barely move in the ring and didn’t do much in this era after returning earlier in the year.

If you look at Bret’s track record of Summerslam matches along with the different kinds of incredible opponents: Demolition, The Brain Busters, Mr. Perfect, Owen Hart, The Undertaker, and The British Bulldog. You’d be hard-pressed to find many, if any, who have had better runs. Of course, he had not so good matches with the likes of Doink, Jerry Lawler, and Isaac Yankem but that’s to be expected given where those respective talents were at those points in their careers. All things considered, I believe Bret Hart had the best and most high-profile run as Mr. Summerslam.

That’s it, folks. Bret Hart is Mr. Summerslam in my opinion. Now, of course, there are two names in the Top 5 who are facing each other at Summerslam 2021 in Edge and Seth Rollins. There is a guy in the honorable mentions list in John Cena who has a big Universal Title match against Roman Reigns and another guy in Randy Orton who will likely have a match at the biggest party of the summer. Then of course you never know when guys like Triple H or Brock Lesnar could lace up the boots again so this list could look very different in a few years’ time as I don’t see guys like Edge, Seth Rollins, or Randy Orton slowing down anytime soon. Until next time.

Thanks for reading. I’m very active on Twitter @GiftedMoney talking about wrestling among other things, so feel free to message me on there with any thoughts or comments.