Welcome back for some more Collective Thoughts. As you can tell by the title, I wanted to spotlight a wrestler that has come on to the scene recently, but one that I think has big money written all over him, Bron Breakker. I wanted to take a look at his first couple of weeks on NXT 2.0 TV, as well as talk about where he might be heading in the future. His ridiculous name aside, this guy looks and acts like a star already, and he only has a few matches under his belt.

For those who don’t know, Bron is the 23-year-old son of Rick Steiner, who was one half of the Steiner Brothers, a personal favorite team of mine. Rick and Scott dominated the tag team world throughout the 1990s and won titles all over the globe including WCW, WWE and NJPW. Their resume and legacy speak for themselves, but I can’t put them over enough. Bron is looking to carry on that legacy, although they just need to give him the Steiner name already.

The first time I saw Bron was the first edition of NXT 2.0 on September 14, like everyone else. After he signed with WWE in February 2021, this was the first time we were able to see him on a grand scale. The first thing that popped into my head as he was making his entrance was: “Wow, this guy looks like a wrestler.” I am sure I am not the only one who had that thought. He was also wearing a singlet that was just like the ones that his family wore during their time in the business, and I was pretty stoked about it. 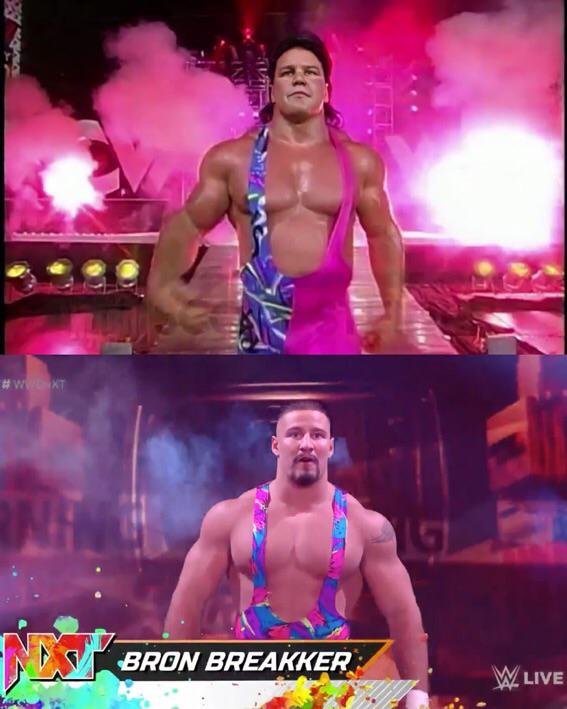 In his first match, he made quick work of LA Knight, a booking decision I won’t ever understand, and looked pretty impressive throughout the match. Normally when you have guys that are a little green or have limited TV exposure, you run into some hiccups but everything seemed fine in this one. They had a quality match that ended when Bron hit a big Powerslam and beat LA Knight clean in the middle of the ring. It looked smooth and he showed a lot of power and didn’t fall into a lot of the same pitfalls newer talent might find themselves in. I didn’t like him going over LA Knight, who was in the NXT Title match later on in the night, but it is what it is.

Then on this past week’s episode of NXT, Bron had another impressive showing, this time main eventing in a tag team match which found him teaming with NXT Champion Tommaso Ciampa to take on Pete Dunne and Ridge Holland. They came out with the victory in that match as well, with Breakker looking impressive and picking up the win for his team. After the match, he hesitantly gave the belt back to Ciampa, which one can only assume is going to be a feud moving forward. Seeing how little he has been on TV, being in a big spot two weeks in a row makes me think the powers that be think as highly of him as the rest of us do.

What do we see in this guy that we haven’t seen in some other talent that has come through NXT? I mentioned his look already, but there just seems to be something very old-school and authentic with how he looks and talks. He has cut a few promos already and if you closed your eyes, you would think it was Rick or Scott talking instead of Bron. He is presented like the guys that we fell in love with as kids, and would have been someone that would have succeeded in an era where the WWF was “The Land of The Giants”. As much as we like the new generation of talent, who is smaller and more athletic, there is something about seeing a jacked-up monster destroying people in the ring. That’s not to say that Bron isn’t athletic for his size because he definitely is, but he’s obviously a different body type than some NXT greats like Johnny Gargano or Adam Cole.

Do I think Breakker is NXT Champion sooner rather than later? I do actually. This is one of those rare cases that Vince McMahon sees that he might have lightning in a bottle and he is going to try and capitalize on it as much as he can. AEW has more momentum right now, but he sees something in this guy and I could see him on the main roster by the end of the year. That might be a little soon, but at the same time, when you have it, you have it.

I just wish WWE would change his name. His real name is Bronson Rechsteiner, so that’s where the Bron comes from. Rex Steiner has been the one floating around the internet, and I feel like that would be an awesome way to start on a big run on Raw or Smackdown. There have been reports saying that Vince wants talent coming through NXT that are guys he could see main eventing WrestleMania some day. Did he find the first guy in that group with Bron Breakker? I think so, and I have a feeling he might agree with me. This guy is a stud and he harkens back to a day where wrestlers looked a certain way physique-wise and he sees that too.

I guess the last question to ask would be, is Bron Breakker destined for a top run on the main roster? I think he is, but we have seen this before. Guys who go out and really exceed expectations in NXT (cough Adam Cole) only to be misused or not used on the main roster at all. See the recent booking of Karrion Kross as another example. I don’t think that Bron will have that same pitfall, though, only because Vince is going to see him as someone he built up from the ground up, and probably already has ideas in his head for Bron on the main roster level. I would even go as far as saying that Bron could be the one to beat Roman Reigns for The Universal Title. Crazier things have certainly happened in wrestling over the years. Time will tell, but I think we might have “The Next Big Thing” (a moniker once given to Brock Lesnar nearly 20 years ago) in wrestling right front of our faces. I could be wrong, but I have a strong feeling about this.

What have you thought about the debut and early rise of Bron Breakker? Love him? Hate him? Do you wish they would just change his name already? Either way, keep the conversation going @collectiveheel on Twitter, and let me know your thoughts. Next week, I will be covering one of the most infamous shows in WCW history, Starrcade 1998. I hope to see you there. Talk care of yourselves, and each other. I will be back soon enough with some more Collective Thoughts.