Getting color, blood, blading, a crimson mask, call it whatever you want, we all know they mean the same thing. Blood is regaining some prominence in mainstream wrestling with the popularity of AEW and their allowing of blood. Blading seems to have gone by the wayside, with most recent cases of color in wrestling happening when someone gets busted open the hard way. Sometimes blood can be used perfectly and really sell a feud, and sometimes, it goes too over the top, and can really take you out of the experience of wrestling.

Recently, when WWE uses archival footage that prominently features blood, such as on their YouTube channel, the footage goes black & white. While different from the source material, it does give the footage a cool cinematic feel. This just shows WWE’s dedication to not having blood on any of their programming. Legend says that Shawn Michaels and Chris Jericho had a match at 2008 edition of “The Great American Bash” where Michaels bled so much that WWE just about immediately banned blood and blading in the WWE. That legend was named Chris Jericho, but that’s beside the point. (This was also around the time when WWE became a PG company too.) Since then, most incidents of blood in WWE have occurred when someone got legitimately cut open in some way. There are certain cases that are exceptions, like Roman Reigns using a blood pack during his feud with Triple H, or Brock Lesnar “safely” cutting open Randy Orton with his elbow.

When a WWE wrestler gets cut open, in recent times, the immediate reaction by the referee is to stop the match momentarily, apply Vaseline to the wound to stop the bleeding, then resume the match as quickly as possible. WWE will show Kane fall through an on-fire table before they will allow someone to blade. They go as far as to fine performers money if they intentionally blade. Batista and Chris Jericho wrestled a steel cage match where both participants and the referee all got fined when Batista bladed, and somewhat famously, Batista paid all the fines.

Other wrestling companies, being that their TV ratings aren’t “TV-PG”, seem to have a much laxer policy when it comes to blading. AEW seems to be alright with blading, but doesn’t seem to use it all the time, as most cases of blood in AEW similarly seem to happen from a legitimate cut occurring. At the very least, they appear to be fine with blood appearing on their programming, especially since they are “TV-14”. There are cases of crimson masks in the promotion, it’s just that the most memorable examples, save Dustin vs. Cody, are not blade jobs. That, or I’m even a bigger mark than I previously anticipated. The difference here is, they allow blood to actually add to a match, rather than actively shying away from it. 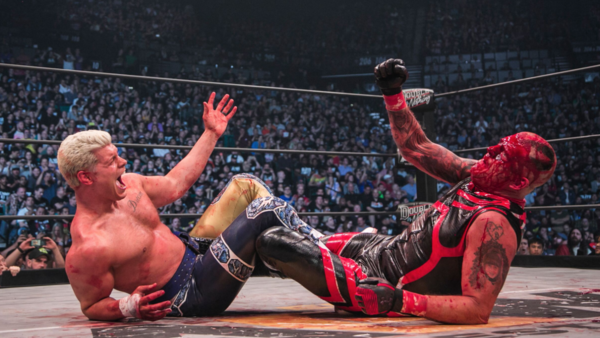 When Cody got cut open from a nasty landing during his AEW World Title match against Chris Jericho at last year’s Full Gear, the match wasn’t stopped or paused to stop the bleeding, he fought through the blood, and the match was made more intense as a result. Now, it’s probably not a good health decision to work through an injury, but if everyone involved, including the ringside doctor, says it’s okay to continue wrestling, I’m going to continue to enjoy the match.

Cody Rhodes is often criticized for overusing blood in his matches in order to force a “big match feeling” to them. This is a concern, but I think he uses them well, only during some pay-per-views, or similarly leveled important matches. But the concern is real. Most hardcore wrestling fans know about deathmatch wrestling, sometimes referred to as “garbage wrestling”. Deathmatch leagues are controversial for a number of reasons, but one of them would be that they desensitize violence in pro wrestling. When each match features extreme weapons being used, you either become indifferent to them after a few matches, or you have to somehow find a way to ramp it up with each successive match. The same applies to blood. When someone bleeds every match, someone has to bleed even more in each consecutive match for it to mean something. And with blood, you can’t keep increasing the amount of blood, because that’s literally a health concern. Like when Eddie Guerrero infamously bladed too deeply in a match against JBL, instead of making it an intense match as was intended, it is more remembered as being dangerous and concerning.

There are certainly times when blood is used well in wrestling matches. One of my personal favorite uses of blood in wrestling is from an underappreciated match between EC3, and Rockstar Spud, now known as Drake Maverick. They had a hair vs. hair match which, upon a rewatch, is mostly just interference and brawling. But what took it to the next level was the usage of blading and blood. This was a personal, intense rivalry, and the use of blood in their blow-off match for the feud really sold the intensity of their hatred for each other. Plus, the image of Rockstar Spud hanging upside down from a turnbuckle a shaved and bloodied mess is striking.

Blood certainly has its place in wrestling; it just needs to be utilized properly. Too much blood can desensitize the audience to the usage, and its attempt at added brutality can completely fall flat. But a proper, rarer, incorporation can really sell that this is a blood feud, pun intended. When blood can be used sparingly, and it’s not at the risk of hurting the performer, I think it can be an excellent tool in the making of a professional wrestling match.