Coming off a career-best year in 2011, The Miz was at a bit of a crossroads. It would be tough for any wrestler to top main eventing Wrestlemania or main-eventing Survivor Series against The Rock and John Cena, but Miz was in an unusual position. Despite being pushed heavily, the WWE brass had begun to lose faith in Miz. Rumors of him being viewed as someone who the higher-ups had “soured on” on at the time For any other wrestler, that could’ve been the end. But through hard work and talent, Miz did more than simply turn his career around, but would also help to elevate the IC Title and follow on from the work of Cody Rhodes.

Although he was still featured prominently on TV, his booking would reflect the idea he was looked upon less fondly, as he would feature in a 20-match losing streak in the early parts of 2012. It wasn’t until picking up the win for Team Johnny at Wrestlemania 28 in a twelve-man tag match would he finally get his win. This wouldn’t signify a change in fortune for The Miz however as he would languish in the midcard before taking a two-month break. Miz would return at Money in the Bank, before making the biggest move of his career since his WWE Title win, winning the Intercontinental Championship on RAW 1000 in a match against Christian. Little did we know at the time, this would be the beginning of many reigns of one of the greatest IC Champions of the decade.

The first couple of reigns Miz had with the Intercontinental Championship were average at best or too short to be ranked. A title defense against Rey Mysterio and in a fatal 4 way at Night of Champions would be the highlights of Miz’s first reign before dropping the title to Kofi Kingston on the premiere edition of Main Event. This was before the present format Main Event when Main Event was viewed as an important show for the company, rather than a place for underutilized talents to ply their trade.

The next IC Title reign was rather controversial, as Miz had recently turned face. Many viewed this as out of character for Miz and he wasn’t able to get over as a babyface. The truth was that his character didn’t really change upon becoming a face, unlike today where Miz is a family man with a wife and kids, he was still an annoying trash talker. He defeated Wade Barrett to win the IC Title in the Wrestlemania 29 Pre-show in 2013, but lost the title immediately on RAW the night after Wrestlemania.

As you can see, the first two reigns of The Miz weren’t great. Whilst the first wasn’t horrible, the second was too short to be viewed as anything more substandard. Miz would have a difficult rest of 2013 and early 2014, staying out of the main event picture and being largely relegated to the lower mid-card. As what happened earlier, a two-month break to film Marine 4 would again result in positive change for The Miz. Miz would turn heel again upon his return, but would also play up being a big Hollywood story and “The A-Lister” persona. Miz would begin a feud with Ziggler (not the famous one), who he would trade the belt with back and forth after winning the vacant title at Battleground. This would last until the night after Night of Champions, losing the belt to Ziggler for the final time.

Whilst these reigns weren’t long, they produced two things: Quality matches, which shouldn’t be a surprise considering he was wrestling someone like Dolph Ziggler. But the important one, would be the birth of the Damien Mizdow character. Sandow, who had been impersonating different people for weeks, became the stunt double for Miz, which would lead to a long term feud which would result in getting Sandow even more over than he was in the process. Whilst the ending disappointed a lot of people, without the IC Title, the storyline would never have happened. 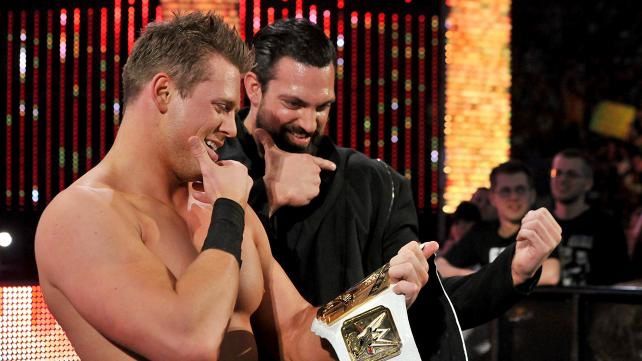 Miz wouldn’t smell the IC Title again until around Wrestlemania 32 in 2016, when he was an entrant in the IC Title Ladder Match. Unbeknownst to us at the time, Miz was originally booked to win the match and take the title. However, a push from Miz thought to give the title to Zack Ryder, who was a late entrant in place of an injured Neville (PAC), would make for a far greater story and match. It wouldn’t take Miz long to gain the title, as he would beat Ryder the night after WrestleMania to win the title. This was notable though, as Miz introduced a new part to his act, his wife Maryse. From this point on, all of Miz’s IC Title reigns would be pure quality.

His fifth reign would last 188 days, but the quality of matches and storylines would be what stood out in arguably one of his best runs with the title. Not only did he have classics like the Fatal 4 Way against Owens, Zayn and Cesaro at Extreme Rules, but his storyline with the then-retired Daniel Bryan and Dolph Ziggler was one of the best storylines to come out of the new brand extension in the summer of 2016.

The Miz’s promo on Talking Smack is still regarded as one of the best promos in the modern era. He and Ziggler would trade the belt, contesting in epic matches against each other, including at No Mercy 2016 where Ziggler’s career was on the line. It speaks to the strength of the storyline that many considered that there was a real possibility that Ziggler would retire and transition to a backstage role. Miz would lose the title to Ambrose at the start of the year, but wouldn’t last long without it as he would regain the title months later at Extreme Rules in June 2017 after being drafted to RAW.

The thing about Miz and his IC Title reigns were that the stories involved were not only interesting, but he was treated like a top guy when holding the title. Plus, considering Brock Lesnar was Universal Champion around that time and only appeared sporadically, Miz was the top singles champion on RAW. His title feud with Roman Reigns would further prove this, as he would both lose then regain the title from Reigns, bringing up reign #8. While these reigns weren’t necessarily the longest IC Title reigns, nothing The Miz did with the title was bad. His last match as IC Champion at Wrestlemania 34 was one of the best Wrestlemania opening matches, against Finn Balor and Seth Rollins, dropping the title to Rollins.

The Miz and the Intercontinental Championship were just a great fit for one another throughout the 2010s. The Miz has the second most reigns as the IC Champion with eight (behind Chris Jericho’s nine) and is just 22 days behind Pedro Morales for the most days as IC Champion.

To this day, if the IC Title needed someone to help boost its status, The Miz would be the first person the WWE would turn to. Miz has created many amazing moments with the title, far more than many in the last decade. Hopefully, we haven’t seen the last of Miz and the IC Title, but I doubt we have.