Welcome to another edition of An Indy Reaction. I attended last Thursday’s Insane Wrestling Revolution 7 – The Fall Brawl. I missed the VIP portion of the show again and only attended the main card.

All photos are courtesy of the Insane Wrestling Revolution Facebook page.

Here was the poster for the event. 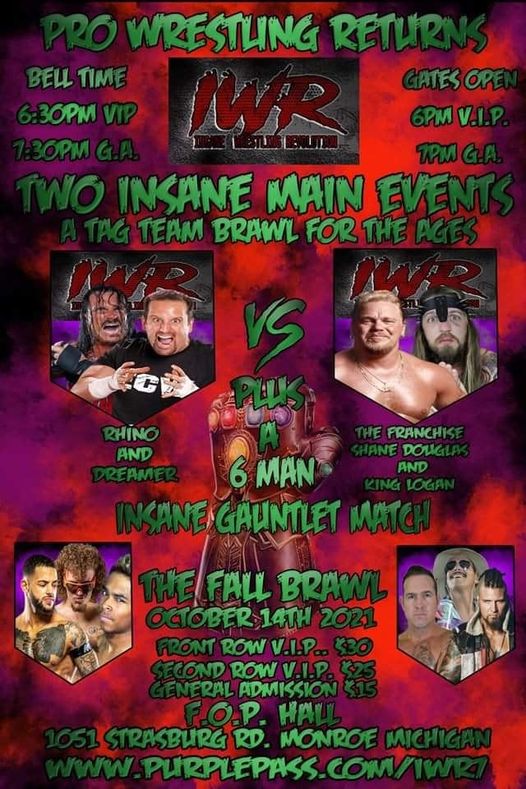 To open the show, the ring announcer is in a crazy Halloween suit that was likely stolen from Seth Rollins and tells us that Wednesday, December 29th will be Insane Wrestling Revolution 8 – Insane Holiday Hell.

Our opening contest was a tag team match with Death Threat Army’s Aaron Orion and Jack Price taking on the team of DBA and AEW Dark’s Mysterious Movado. DTA’s manager, Impact Wrestling’s John E. Bravo, gives off a Paul Heyman like introduction, even including the capital E period in his name. Great heel work there. Movado tries to get the yay/boo going at the opening bell. Once the match got settled in, it turned into a really good opener. DTA work well together. Movado and DBA set up a rather unique hot tag spot where DTA had one member holding his partner in a headlock, only to get clotheslined and taking his partner down with a DDT. DTA recovers from that and picks up the win.

The Bachelor Ben Boone is out next to take on Alex Clucky. Boone’s entrance is him lip-syncing Seal’s “Kiss From a Rose” into an actual rose. His entrance was longer than the match with Clucky hitting one move, a Sliced Bread #2 like move, onto the rose for the three count.

The first of our two main events is next. Before the match starts, the ring announcer, Mark Roberts, interviews the fan that jumped into the ring at the last show after The Dread King Logan’s match and got literally wiped out by him. The guy said to not get into the ring and, surprise surprise, he wants to be an IWR superstar. Logan comes out with “The Franchise” Shane Douglas and wipes the guy out again. Their opponents come out next: Rhino and Tommy Dreamer. This was a great brawl. They would eventually pair up as Dreamer/Logan and Rhino/Douglas and battle around the place. Rhino didn’t take our chairs this time, but did use an empty one on Douglas. Douglas did a nice table spot right by us before he and Rhino fought right in front of us. Dreamer and Logan were fighting around the ringside area. Things eventually wind up back in the ring with Logan winning the match for his team by pinning Rhino. After the match, John E. Bravo reappears with his other team, The Gamechangers, Nate Bock and Chinstrap Jesus, to attack Rhino. Dreamer eventually chases them off with a chair. Dreamer issues a challenge for the next show, him and Rhino against The Gamechangers in a tag team Insane Rules, Falls Count Anywhere match. Bravo accepts the challenge for his team. That also throws us into our quick intermission.

Our first match back from intermission is Rodrageous Rod Lee taking on Doctor X. Lee made up for his quick squashing to Logan at the last show and defeats the good doctor in a short match. Lee does have some impressive moves for sure. It was an entertaining match.

Time for our other main event for the evening, the 6-Man Insane Gauntlet Match. The first competitor out is Impact Wrestling’s Trey Miguel. His opponent is N8 Mattson. Miguel and Mattson are roughly the same size and similarly athletic. They go about five minutes or so showing off some really impressive moves. I’d like to see another singles match between these two in the future. Miguel picks up the win to advance.

The Kenny Urban is our next competitor, cutting an in-ring promo on how he is going to win the gauntlet match. Miguel hits him off the top rope to eliminate Urban.

MM3 is out next. Again, both Miguel and MM3 have similar styles and put forth another great bout. Towards the end of the match, Miguel tweaks his knee and MM3 pounces. Miguel managed to find a way to pick up the win to eliminate MM3.

Impact’s “The Perminator” Sam Beale is out next and jumps Miguel to start the match. Beale focused on Miguel’s knee throughout the match. Miguel sold the knee perfectly before finding yet another way to pull off the victory to eliminate Beale.

The match now switches to a No DQ match as the final participant, Impact’s Mad Man Fulton, enters the gauntlet. Fulton towers over Miguel. The toys come out early and are used quite often. Miguel is still selling the knee injury with the kids sitting in front of us buying into the whole: “Can the injured babyface successfully run the gauntlet match?” Fulton set up a door close to us with the intention of putting Miguel through it. Miguel counters and puts Fulton through it to start his comeback. They end up back in the ring when Dread King Logan reappears and took down Fulton. Miguel capitalizes and successfully runs the gauntlet.

After the match, Impact’s Petey Williams comes down to the ring to congratulate Miguel and told him that he deserved it (indeed). Williams said that Miguel is still undefeated in IWR because they haven’t squared off. The match gets made for the next show and Miguel celebrates the gauntlet win to send the crowd home happy.

Let’s take a look at tonight’s highs and lows.

Trey Miguel continues to impress me. I compared him to Ricochet in my last column and I stand by that. He can pull off some amazing things in the ring. I agreed with Williams that Miguel deserved the gauntlet win. It was also a nice touch selling the knee injury during the victory celebration.

The Dread King Logan is impressing me as well. He looks to be positioned for a monster heel run and it would work really well for him. I get the feeling a Trey Miguel and Dread King Logan match is inevitable. It’ll be a great showdown for sure.

There really wasn’t anything that didn’t work on the show. The main events worked as they should have. If I had to pick something, I guess it would have been that Halloween suit on Mark Roberts. It was crazy looking for sure.

IWR8 already has a triple main event announced; Trey Miguel vs. Petey Williams, Rhino and Tommy Dreamer vs. The Gamechangers, and Mad Man Fulton vs. The Dread King Logan.

Tickets can be purchased at: https://www.purplepass.com/#226296/Monroe_Pop_Fest-Insane_Wrestling_Revolution_8_-_INSANE_HOLIDAY_HELL-Robert_A._Hutchinson_FOP_Lodge_#113,_Monroe_Michigan-December-29-2021.html