The middle of the 2010s was defined by the growth and explosion of NXT. What started off as a tacky developmental territory morphed into a full-blown third brand that was seen as superior to both RAW and SmackDown in many ways. The match we’re looking at now involves two of the top names to go through that yellow brand.

Kevin Owens and Sami Zayn are two of the most famous Canadian wrestlers active today. Both of them became famous for their work across the independent scene and in WWE. They were known for their intense and captivating matches, whether as opponents or as partners. So it stood to reason that, once both men came to WWE, that they’d reignite that same feud and showcase it in front of a new audience. But does their WWE work match up to their earlier matches that made them famous? Read on to find out.

Today we look at the big singles match between Owens and Zayn from WWE Battleground 2016.

As a reminder, I am reviewing Five Star and almost-Five Star wrestling matches as rated by Wrestling Observer’s Dave Meltzer. It goes back to the 1980s and I’m going to pick different matches from different eras to see how they look today.

There is a long and storied rivalry between these two men that spans years to their pre-WWE days which involves a masked character and some Mexican orphanage. So I’ll skip those complexities and focus on their WWE history. Owens turned on Zayn immediately after Zayn won the NXT Championship and then won that same title off of Zayn shortly thereafter. By early 2016, both men had ‘moved up’ to the main roster, but Zayn was sidelined with an injury despite debuting before Owens.

Zayn returned to the main roster at the 2016 Royal Rumble event and eliminated Owens. Neither man won the Intercontinental Championship at WrestleMania 32 nor the Money in the Bank briefcase a few months after that. During their heated feud, Owens got one big PPV win over Zayn at Payback, only for Zayn to score his own win on an episode of RAW soon after. Thus, to settle the score, this match was announced. 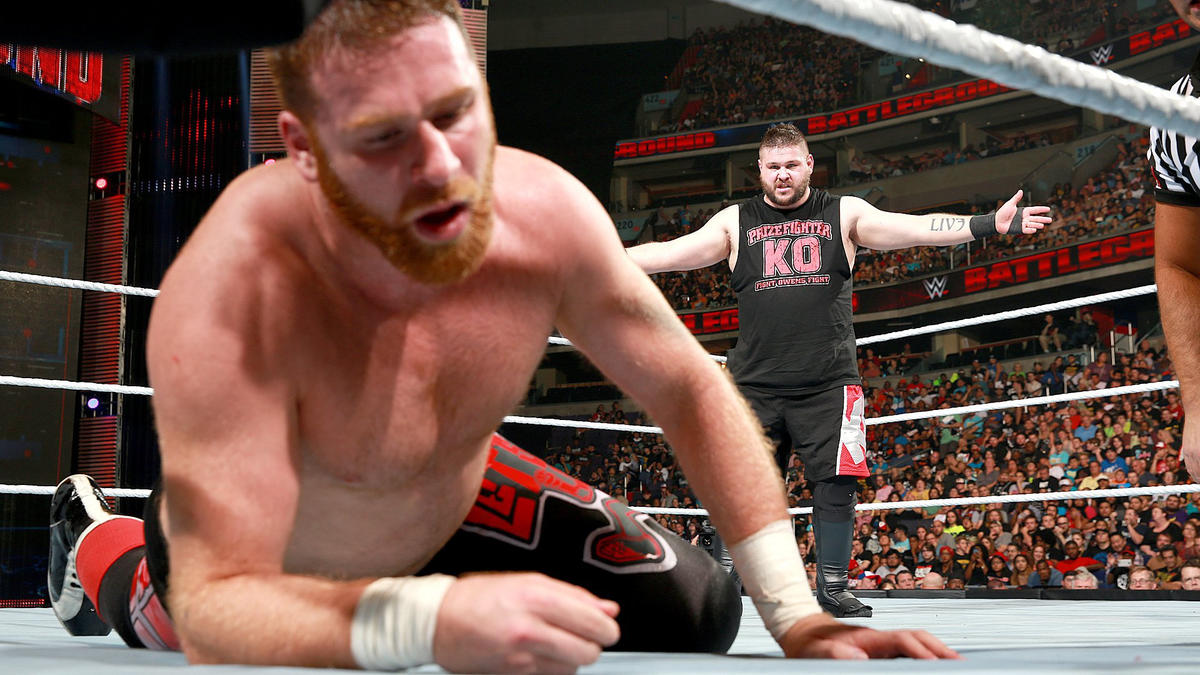 This match took place on July 24, 2016 and it was rated ****1/2 by Dave Meltzer in the Wrestling Observer Newsletter. John Canton of TJRWrestling also rated it ****1/2 out of five in his Battleground 2016 review.

The bell rings and Zayn charges for a Helluva Kick but Owens escapes the ring. Zayn gives chase and they brawl briefly until Owens tosses him into the barricade. Owens tries to whip him into the barricade again but Zayn reverses it and Owens hits it instead. Zayn repeats this and lands a clothesline. And then tosses Owens into the ring. Zayn sees Owens going for a punch so he shoulder checks Owens in the gut, and then flips over the ropes and over Owens. He charges, ducks Owens, jumps over him, and lands a calf kick for a one-count. He counters an Irish whip with a kick and goes for a corner lucha arm drag but Owens cuts Zayn off and crotches him on the top rope. Owens follows with a corner cannonball press and pins for a two-count.

Owens trash-talks Zayn as he lands some hard strikes for another two-count. He mocks the fans as they chant for Zayn and as he stands on Zayn’s hand. Then he goes for a suplex but Zayn tries to counter. That fails and Owens suplex tosses Zayn into the ropes stomach-first, and then lands a pair of soccer kicks and a running senton for two. Owens teases another soccer kick and Zayn tenses up to take it, but Owens fakes him out and applies a deep chinlock instead. Owens mocks him and the fans some more as Sami tries and fails to escape.

Sami tries to fight out of the chinlock after a long while and lands a clothesline as Owens charges at him. Owens charges but Zayn counters with a Michinoku Driver for two. Zayn goes for a charge but Owens catches his foot and drags him out of the ring. Owens goes for the apron powerbomb, Zayn escapes and kicks Owens in the face and goes for a springboard moonsault. But something goes a but awry and Zayn barely hits Owens with his foot and nearly necks himself on the apron. Luckily for Zayn, he lands on his shoulder. Unluckily for Zayn, Owens sees this and smashes that arm and shoulder into the ringpost. 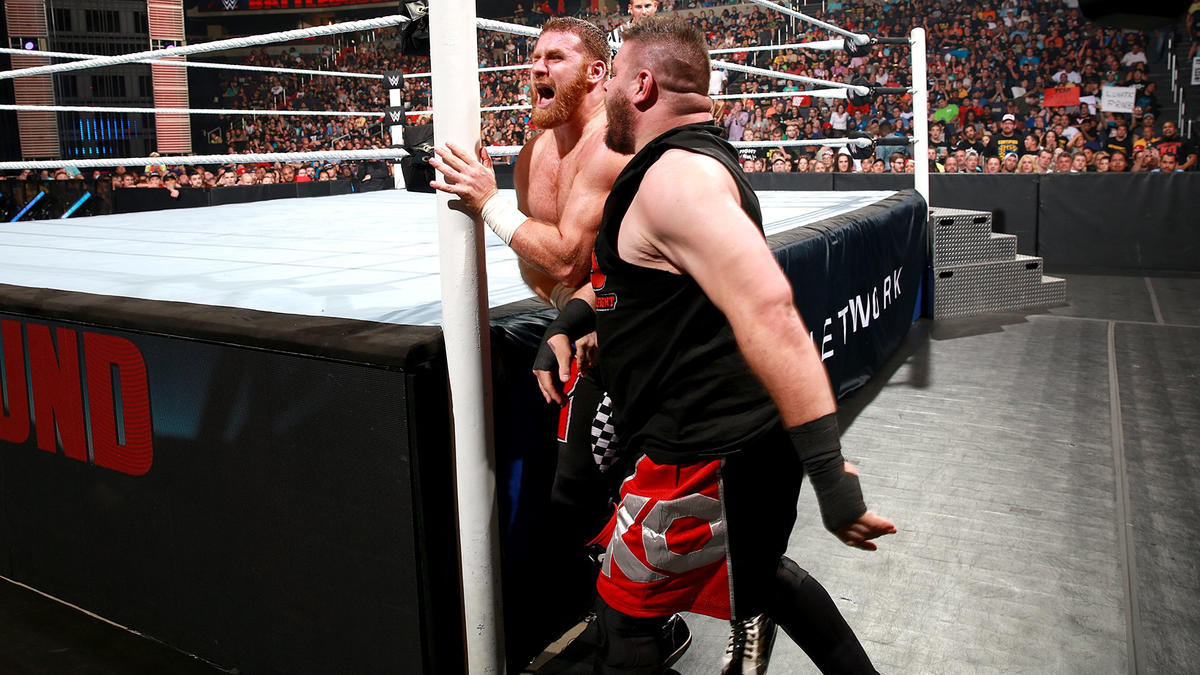 Back in the ring, Owens tries to capitalize on Zayn’s injury but Zayn counters into a Blue Thunder Bomb for two. Owens cuts Zayn off on the top rope and they brawl until Zayn head-butts Owens off. Zayn dives off and rolls to safety but runs into a big superkick from Owens that gets two. Owens follows up with a crossface, trapping Zayn’s bad arm in the process. Zayn crawls and crawls and gets his foot on the ropes.

Owens lands two brutal corner clotheslines and goes for a third. But this time Zayn counters with a corner Exploder suplex. Zayn charges for the Helluva kick but Owens escapes a second time. Zayn goes to the top rope. Who does he think he is, Hiroshi Tanahashi? But before Zayn can dive, Owens catches him and puts him on his shoulders. But Zayn escapes…and lands an APRON BRAINBUSTER! Damn, what a brutal landing. Both men make it into the ring before the ref’s ten-count and spend some time recovering from that high-impact move from Zayn.

Zayn gets up first and lands some punches with his bad right arm. The fans chant for both guys equally as they begin trading punches to the head. Zayn gets the upper hand. Owens escapes to ringside once again. Zayn charges for the through-the-ropes tornado DDT. Owens answers with a superkick first and then follows with a cannonball press. Owens isn’t done yet. Frog Splash connects. One, two, no, Zayn kicks out. Owens goes for the pop-up powerbomb. Zayn counters with a top-rope tornado DDT. He attempts the Helluva Kick again. Owens counters with yet another superkick. Pop-up power—no, Zayn lands on his feet and lands not one but two high-angle half-and-half suplexes. One, two, NO, Owens barely kicks out. What a close call. Standing ovation from the audience. Zayn charges for his finisher. Owens counters into the pop-up powerbomb. Owens delivers his finishing move. One, two, no, Zayn gets his foot on the ropes. 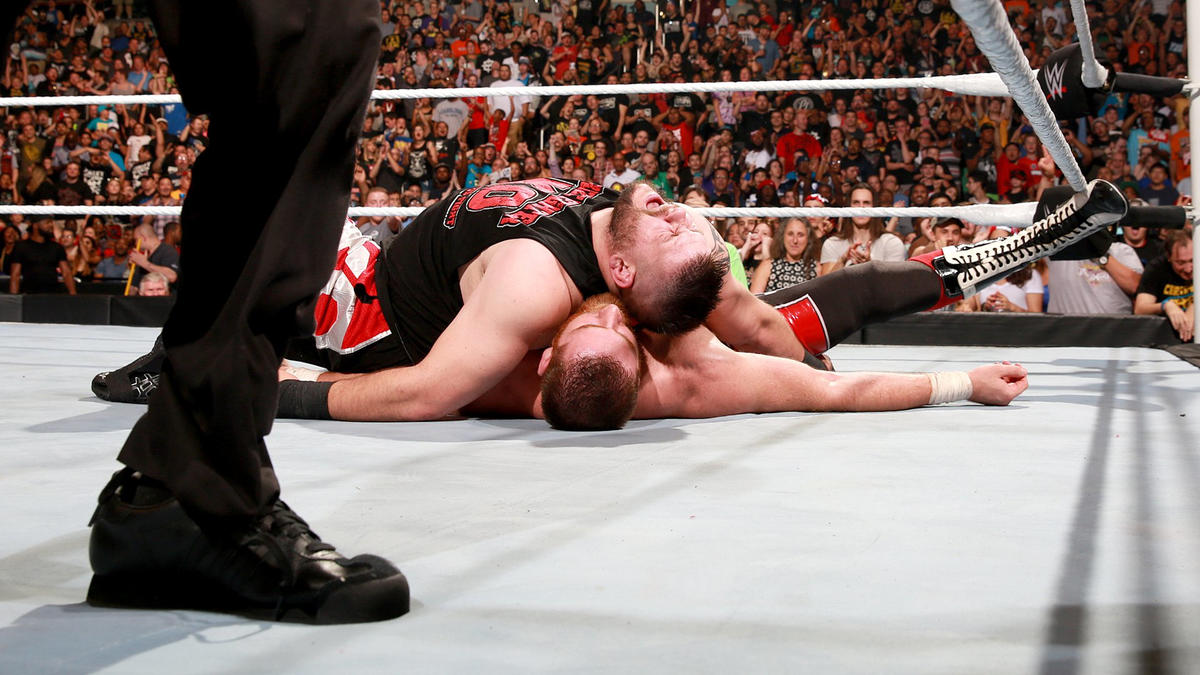 Owens has lost all sense and is beyond frustrated. He slaps Zayn hard and asks why he won’t stay down. Zayn answers by asking for more slaps and then fires one big bitchslap to Owens. Enraged, Owens charges…and runs into another corner Exploder. Followed by a third half-and-half suplex. Helluva Kick connects. Owens collapses in Zayn’s arms. But Zayn isn’t done yet. He lands a second Helluva Kick. Owens goes down. One, two, three! Zayn wins the match.

Fantastic match. That was one of the best matches of 2016, without a shadow of a doubt. This is the kind of match you get when you have two wrestlers that know each other so well and have such a storied history together. It really was awesome.

The story here was that Owens was an obnoxious, arrogant prick that mocked both Zayn and his fans whenever he could. Owens bullied Zayn at every opportunity and went the distance to get people to hate him and get behind Zayn. He was the perfect villain against Zayn’s heroism. Owens did whatever he could to try and stop Zayn’s relentless march forward and nearly succeeded. But he fell victim to his own hubris and lost focus long enough for Zayn to find an opening. And once Zayn landed those brutal half-and-half suplexes, it became a matter of time before he won. It was classic, simple storytelling and it was executed perfectly.

Sadly, I don’t think this was the peak of their capabilities. I’ve seen some of their pre-WWE matches with each other and those were better than this one. This match did take place in WWE, after all. It felt watered down compared to their earlier fights. I get it; WWE imposes certain restrictions and requirements on their wrestlers. Sometimes those changes aren’t that noticeable. But in this case, they were. There was a certain lack of remorselessness in Owens here that was more pronounced in their pre-WWE matches. And in Zayn’s case, I felt like he was wrestling at 90% instead of at 100% like he had years earlier. As such, while I enjoyed this match a lot, I felt it could’ve been better and was a bit hamstrung by the environment in which it took place. 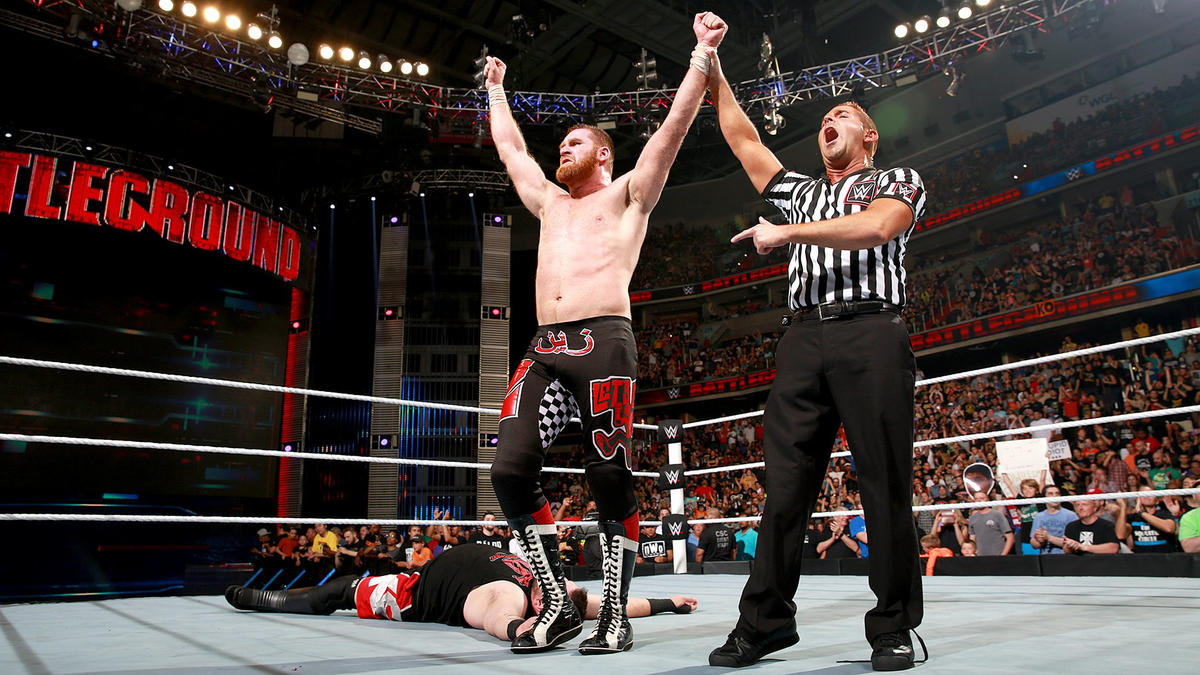 I think this was and is a fair rating for this match. For once, JBL actually did a good job on commentary by saying that this match stole the show, because it did. It was exciting, tense, unpredictable, and it told a great story. This is the kind of great match you get when you put two wrestlers with years of chemistry together and tell them to do their thing.

This isn’t some world-beating epic or some truly ground-breaking historic war. Instead, it was exactly what it needed to be: an under-twenty-minute intense exhibition match between two of the best wrestlers from la belle province. It’s definitely one of the top WWE matches of 2016, but is still a cut beneath much better matches from that year. Which matches am I talking about? The only way to find out is to take a deeper look at my 5-star and almost 5-star match reviews series.