This match came to me highly recommended as something of a lost classic. A lot of people compare it to the famous Rey vs. Eddy Halloween Havoc ’97 and for good reason. This is a match that showed just how good Jericho was during his prime, and how Rey Mysterio could still out-dazzle pretty much anyone in WWE, in spite of all the serious wear-and-tear on his body.

Today we revisit the classic Intercontinental Championship vs. Mask match between Chris Jericho and Rey Mysterio from The Bash 2009.

This match took place during Chris Jericho’s ‘I hate hypocrites’ period. It was a time when Jericho would trash the fans in long-winded promos, accusing them of hiding behind masks and being troglodytes. And by Jericho’s own twisted logic at this time, Rey Mysterio became a living symbol of those fans. So Jericho began feuding with Rey, and at one point got a shot at Rey’s Intercontinental Championship. Jericho won that match (and the title) by pulling Rey’s mask off and pinning him. Naturally, Rey wanted revenge, but Jericho refused to accept unless Rey wagered his mask.

Now, anyone that followed lucha libre in Mexico understands the severity of such a wager. This was an official luchas de apuestas match, meaning that Rey could NEVER wear the mask again if he lost. Even though this match didn’t take place in Mexico, Rey followed those rules because he had been raised and trained in lucha libre culture and heritage and knew how sacred masks are.

And thus the stage was set. Jericho wanted to continue his gloating and smug superiority by forever destroying a wrestler that, in his mind, represented the vile fans he so despised. Meanwhile, Rey was so determined to win back the title he knew was rightfully his that he put his cherished lucha mask on the line, knowing full well he could never be Rey Mysterio again if he lost. It really was all or nothing for Rey, and he was up against a bigger, stronger and more devious opponent.

So the question was, would Rey be able to live up to his billing as the greatest underdog in WWE history by overcoming such stacked odds once again?

This match took place on June 28, 2009, in Sacramento, California. It was rated 4.5 stars by Dave Meltzer of the Wrestling Observer Newsletter.

They lock up and Jericho immediately grabs at Rey’s mask but Rey manages to fight back. Jericho applies a headlock and mocks Rey and his 619 finisher. Rey tries a counter but Jericho tackles him down. Rey leapfrogs, gets tossed in the corner, kicks Jericho away and lands a headscissor takedown strong enough to send Jericho out of the ring. Rey goes for a baseball slide dropkick, but Jericho catches his legs and wheelbarrow slams Rey into the barricade. Ouch. Rey gets back to the ring slowly and Jericho lands a rope guillotine. Jericho lands a vertical suplex for two and applies a modified headlock as Jericho orders the ref to ‘ask him’. Rey somehow fights out but Jericho maintains control and places Rey on the top turnbuckle. He tries to rip the mask off again but Rey fights out some more and knocks Jericho off the turnbuckle. Top-rope seated senton by Rey. He tries to follow up but Jericho counters into a tilt-a-whirl backbreaker. Jericho pins but Rey kicks out.

Jericho forces Rey into the corner and chokes him with his foot. He smashes him into another corner and dropkicks him out of the ring. Jericho gloats and goes for a suplex over the ropes, but Rey escapes. Rey fires back, no, Jericho knocks him down hard for another two-count. Jericho applies a double-arm submission hold to slow the pace down but Rey literally kicks out of it.

Rey reverses an Irish whip and kicks Jericho out of the ring. He climbs the top rope and lands a top-rope senton to the floor. Crazy move. 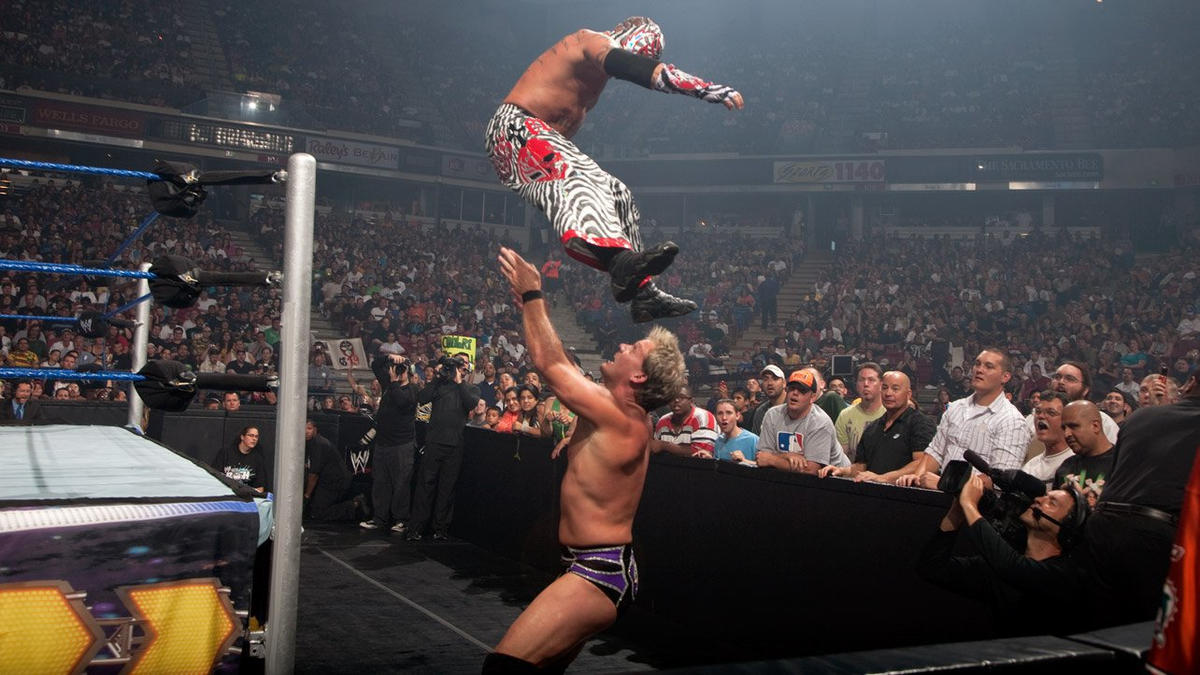 Both men get up slowly. Rey ducks a clothesline and goes for a quebrada but Jericho counters into a British Bulldog running powerslam for two. Jericho lands hard strikes as the crowd cheers loudly for Rey. He dodges a charging Jericho. Top-rope quebrada. Rey gets a two-count. He charges and goes for a front flip – no, Jericho counters into Walls of Jericho. The crowd’s going nuts cheering for Rey. He reaches the ropes, forcing Jericho to let go. A frustrated Jericho charges at Rey but Rey ducks, sending Jericho to the apron. Rey dropkicks Jericho, getting him to his knees. Rey charges for an inverted 619 but Jericho escapes.

Jericho gets back onto the apron and knocks a charging Rey down with a clothesline. Jericho gets to the top turnbuckle but Rey fights back again and lands a big kick to the head. Super hurrican-no, Jericho counters into a superbomb. Amazing counter. He goes for the pin with his feet on the ropes. One, two, no, Rey kicks out at 2.7. the crowd is making tons of noise at this point. Lionsault. Rey dodges. Snap frankensteiner. Jericho kicks out. Rey ducks a clothesline and dropkicks Jericho to the ropes into the 619 position. Rey charges, but runs into a torture rack from Jericho. But Rey counters that into a DDT. Fantastic counter. He pins but Jericho kicks out.

Rey kicks Jericho’s legs and charges. He ducks Jericho again and goes for a springboard. But Jericho counters into a Codebreaker. Both men go down. Jericho crawls over for the pin. One, two, NO, Rey kicks out at 2.8. Amazing near-fall.

Rey kicks Rey in the back and tosses him into the corner. He head-butts Rey on the top turnbuckle and goes for a super frankensteiner. No, he falls off…somehow. From the top rope Rey hits another dropkick, sending Jericho into the ropes. 619! He goes for the frankensteiner. Jericho counters into the Walls. Rey manages to counter into a sunset flip. Fantastic counter. One, two, no, Jericho kicks out. They trade roll-ups and cradles. Neither man gets a three-count. Jericho pulls Rey’s mask off! But wait, Rey has a second mask on. Dropkick into the ropes. 619! Splash from the ropes. One, two, three! Rey wins! 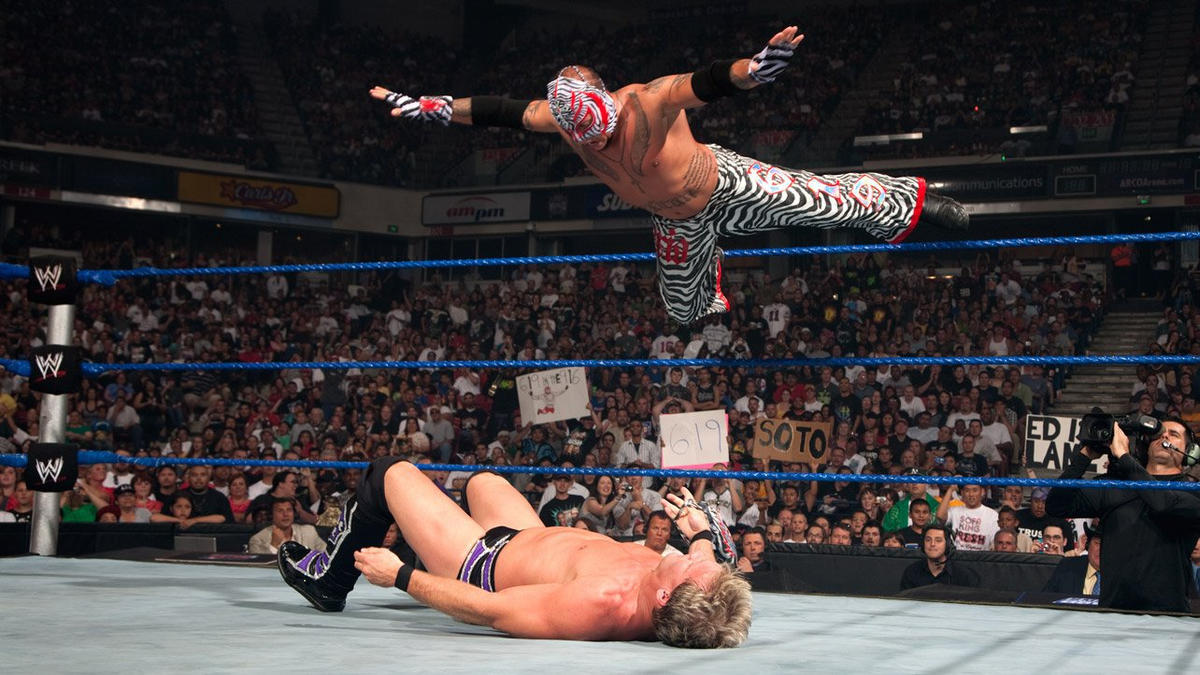 Wow, that was GREAT. That really was one of the most underrated WWE matches of all time. They packed so much action and story into fifteen minutes without it ever feeling like overkill or exaggeration. And while it’s nowhere near as good as the Eddy/Rey match mentioned earlier, it has its own unique charms all the same.

Chris Jericho was at his best here, playing the role of the arrogant champion looking to take advantage of any opportunity. He attacked Rey’s sacred mask often. He slowed the match down and gloated when Rey was down. And whenever Rey seemed to get the slightest bit of momentum, Jericho knew exactly when and how to shut him down. As with most if not all big Rey Mysterio matches, Rey had to fight from underneath against a stronger opponent. In this case, Jericho had an answer for pretty much everything Rey did. That made this match great because usually, Rey’s the guy that comes up with clever counters for his bigger opponents. But here, Jericho had counters for Rey, who in turn had to come up with even more counters for Jericho. The two of them put this incredible, back-and-forth match contest that could’ve ended at any time.

And because they were so evenly matched, they decided to make an object (in this case, Rey’s mask) a part of the match itself. Jericho had Rey nearly pinned, and when Rey kicked out, Jericho pulled his mask off, thinking he’d get another surprise win over a shocked, flustered, and unmasked Rey. Instead, Rey had a second mask on and then used Jericho’s sudden confusion to launch him into the ropes and land his finisher to win. It was a classic example of poetic justice in pro wrestling. WWE gets a lot of criticism for not always executing the best storylines. But here, they pulled off a great one from start to finish.

In terms of action, the two of them did some truly amazing work in this match that fit the story. Jericho kept things simple with his offense, using simple strikes, the environment (like the barricade and the corners), and Rey’s momentum against him. Meanwhile, Rey performed some amazing lucha as always. Keep in mind that this match took place in 2009, and Rey was a 20-year veteran at that point. Although he wasn’t as lean or quick as he was in his WCW days, he still pulled off his insane lucha wrestling as perfectly as he did in his prime. I’ve said it before and I’ll say it again: Rey Mysterio Jr. is the closest thing pro wrestling has ever had to a child prodigy.

This match really is a lost classic and should get more love than it gets. It has tremendous action for a WWE match, a great story, classic match structure, lots of unpredictability (a RARE trait in WWE), and a loud crowd. Rey and Jericho were perfect together here, cast as David and Goliath, respectively. They had great chemistry together and it showed. It was tremendous to see a clever babyface actually overcoming the cocky heel’s bag of tricks for the win.

For anyone out there that’s a fan of either wrestler, make the effort to see this match. It really is that good, especially for the second match on an otherwise forgettable B-level WWE PPV.