Today we look at a match involving someone that many fans argue should be on the Mr. Rushmore of NXT: Sami Zayn. From his debut in 2013 to his departure from the brand in 2016, Zayn was arguably The Guy in NXT. His personality, wrestling style, matches and stories were what NXT was all about. To celebrate his accomplishments on the yellow brand, we revisit one of the best matches in NXT history and also one of its biggest hidden gems.

It’s the classic singles match between Zayn and Cesaro from NXT ArRival in 2014.

This was the culmination of a rivalry that had started almost a year prior as Zayn was beginning his WWE career. Zayn debuted on WWE TV on May 22nd, 2013. On that night, he defeated two former WWE champions in Curt Hawkins and (Antonio) Cesaro, the latter being deemed a major upset. That initial feud culminated in a terrific two-out-of-three falls match that Cesaro won. The feud between Zayn and Cesaro continued on non-televised shows and events, and by early 2014, Zayn’s obsession with losing to Cesaro began to consume him even more. To put things to rest, he challenged Cesaro to one more match at NXT ArRival to settle the score. 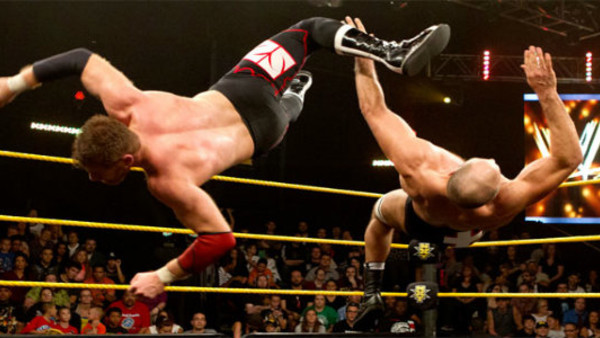 This match originally took place at NXT ArRival, which was on February 27th, 2014. It was originally rated ****1/4 by the Wrestling Observer’s Dave Meltzer. Let’s see how well the match holds up now.

They lock up and Cesaro quickly out-powers Zayn. They lock up a second time and Cesaro lands an amateur takedown and then slaps the back of Zayn’s head. A chain grappling sequences ensues and Cesaro lands a nice dropkick. Cesaro goes for a back body drop but Zayn lands on his feet and goes for a running hurricanrana. But Cesaro stops Zayn’s momentum dead in its tracks with his raw power. He goes for the giant swing but Zayn lands on his feet and nails an arm drag and a baseball slide dropkick. Suicide dive by Zayn. Over the rope and out of the ring onto Cesaro.

Zayn tosses Cesaro back into the ring and goes to the top rope. He dives with a crossbody…but Cesaro catches him and counters with a tilt-a-whirl backbreaker for a two-count. Cesaro goes on a smashing spree, tossing Zayn into anything metal around the ring. Zayn starts to fight back as the crowd rallies behind him, but Cesaro quickly shuts him down. Cesaro continues throwing Zayn into any hard surface he can find. Cesaro tries to smash Zayn’s foot into the ringpost but Zayn fights back. He goes for the through-the-ropes DDT but Cesaro shuts him down once again with a huge uppercut. The fans start chanting ‘Holy s**t’. can’t say I’m surprised.

Cesaro smashes Zayn’s leg into the post and stomps on it some more back in the ring. Zayn kicks Cesaro in the back as Cesaro works over one of his legs, so Cesaro answers with a kneedrop to Zayn’s injured leg and gets a two-count. Cesaro lands a dragon screw leg whip and continues to wrench Zayn’s leg as the fans chant ‘this is awesome’. Cesaro hits the ropes but Zayn lands a jumping kick to the face out of nowhere. But any attempt at a comeback from Zayn gets shut down immediately as Cesaro goes back to the weakened leg.

Cesaro lands two more dragon screws and Zayn fights back with forearms but Cesaro doesn’t even flinch. Zayn tries to counter with an enzuigiri but Cesaro ducks while still holding Zayn’s leg and transitions into a single leg crab. Great counter. Zayn reaches the ropes, kicks Cesaro as he charges, and then sends him falling over the top rope and out of the ring. Zayn ends up on the apron and goes for a quebrada. But Cesaro catches him and slams him back-first onto the entrance ramp. Another brutal landing for Zayn.

They heads-butt each other and Cesaro drops Zayn with a huge uppercut. Zayn looks to be out cold as the referee starts counting to see if Zayn will get up. Zayn gets up at three and gets dropped by another uppercut. He gets up at the count of six and then eats yet another uppercut. Cesaro drills him with another uppercut, but this time Zayn stays on his feet and starts fighting back. Back-and-forth they go hitting each other as they hold each other’s head in place. Then Zayn ducks and lands a German suplex out of nowhere. Zayn charges the corner but Cesaro boots him down. Cesaro goes for the Neutralizer. Zayn powers out. Cesaro tries to counter into a sunset flip pin, but Zayn cradles him instead. One, two, no, Cesaro kicks out. Yoshi Tonic/Manami Roll by Zayn. Amazing flipping powerbomb counter by Zayn. He pins again but Cesaro still kicks out. The crowd is giving both men a standing ovation.

Zayn tries to maintain control but Cesaro hoists him into the air and lands a pop-up uppercut. He pins but Zayn kicks out at one. Zayn uses the ropes to lift himself to his feet. Cesaro drills him with a discus uppercut. Neutralizer connects. One, two, three! Cesaro wins.

This was great. It’s one of the best wrestling from that era before NXT really took off. And that was thanks to both a simply-yet-relatable story and some tremendous in-ring action. The story here followed the typical David vs. Goliath framework, with Zayn acting as the underdog against a larger and (much) stronger Cesaro. Zayn fought from underneath from the opening bell but found himself struggling to find any sort of advantage against Cesaro. That was because Cesaro used both his power advantage and straightforward wrestling psychology to keep Zayn on defense as much as possible. When Cesaro wasn’t throwing Zayn around like a ragdoll, he destroyed Zayn’s leg so that Zayn couldn’t run around or rely on his speed advantage to confuse and surprise Cesaro. That strategy of Cesaro’s worked for about 80% of the match until Zayn started landing counters out of nowhere. Once that started happening, the fans really got behind Zayn because he had taken such a brutal beating from Cesaro and wanted to see him overcome the odds and win.

But it wasn’t meant to be. Zayn shined as an underdog in peril that never gave up, and got some great near-falls thanks to some lightning-quick counters and transitions. But as cool as those moves were, I never got the feeling that Zayn ever got close to winning. Sure he landed some cool moves, but Cesaro was very much healthier and stronger and Zayn had done precious little to weaken Cesaro to the point that any of those sudden counters or pins could actually be successful. Maybe that was the intent here; that the story wasn’t for Zayn to win but for him to further establish himself as an underdog in NXT. If so, then the match worked wonders in completing that narrative.

But as much as I enjoyed this match, I also found it a bit lacking. Cesaro spent a lot of time working over Zayn’s leg, but it never really got to the point where he could’ve either tapped out or passed out from the pain. Even as Cesaro went back to that limb time and again and even applied a Lesnar-style Stretch Muffler, Zayn’s selling wasn’t that convincing or realistic to the point that a submission victory for Cesaro was possible. As a result, it rendered a lot of Cesaro’s work on that leg rather pointless. 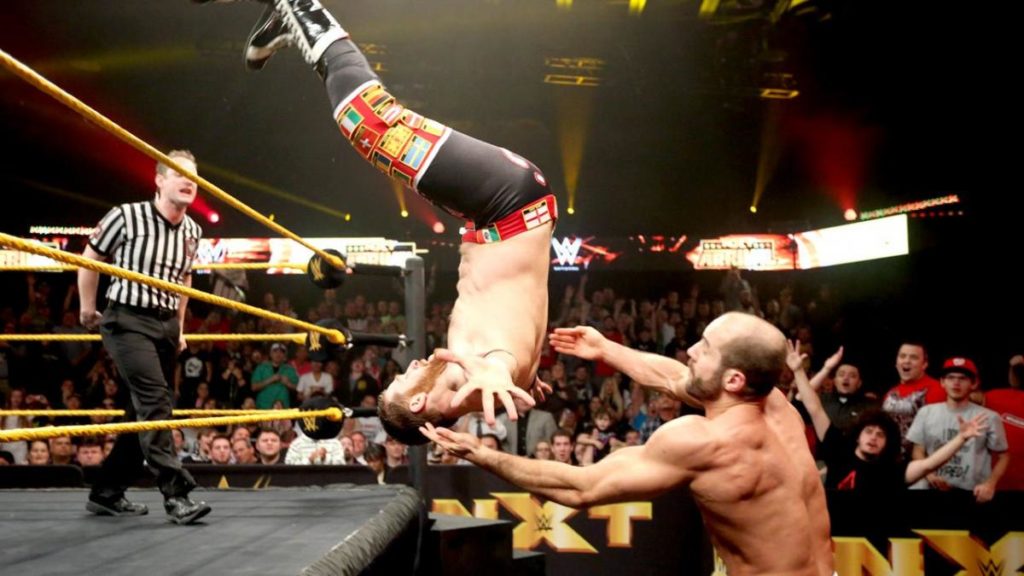 I’ll give this match a bit of a higher rating than Meltzer did. I thought the story of the match was told incredibly well, especially with Cesaro coming across as this unstoppable force that Zayn really struggled to overcome. Cesaro looked like a complete performer here. He was a powerful monster, he showed a great understanding of wrestling psychology, he told a great story, and he kept people on the edge of their seats, not knowing what he’d do next. Zayn also did a tremendous job here as the valiant hero in peril, especially with his comeback during the final five minutes. Personally, I didn’t think he’d win, but he sure as hell did a great job of making winning much harder for Cesaro.

At the same time, I wish they did more in the match and went further with the story they told. I think they only scratched the surface in terms of depth of their story, and I think the match would’ve been better if the action was more focused, especially with regards to Zayn’s weakened leg. All the work Cesaro did on that limb should’ve made that a bigger problem for Zayn, as another problem for him to fight through. If he struggled to even lift himself to his feet and failed to even land his corner boot finisher out of sheer pain, it would’ve rallied people behind him even further. Instead, it became a non-factor by the end, and that sort of inconsistency makes it hard for me to really enjoy matches like this as a viewer.

If you’re a fan of Cesaro’s like me, this is one of the best matches of his career. This match was 80% Cesaro showing off what he could do as he manhandled a smaller guy in Sami Zayn. And while it wasn’t anything historically great or iconic by any means, I think this is a great match watch for anyone curious about how NXT became the brand it is today.